You are here: Home>Topics>Schools & Education>Schools of the Recent Past>Hatfield School>Who were You in the War Game - Sarajevo 1914 - a call for witnesses 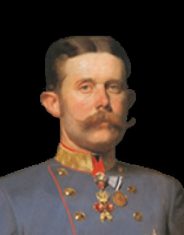 Chris Swingler, HS 1960-67, recalls a special event in the Summer Term of 1966 and asks for anyone with further inputs to email them to him or me directly, or via admin@ourhatfield.org.uk ,or as a Comment (see below) so we can update this Post. This Post is published on ChrisS’s behalf and with his permission, by Chris Hepden, HS 1957-64. 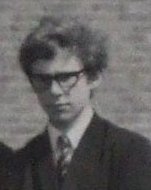 – brief, so needing additions and possibly corrections – of the two weeks in 1966 when the History department organised a war game, involving the fifth form and the whole of the 6th form –upper and lower.

The scene was set as the day in 1914 the archduke Franz Ferdinand was assassinated in Sarajevo. To re-enact the event pupils  were allocated roles as prime ministers, chancellors, generals, the Kaiser, Zsar etc.The countries involved were allowed two moves a day and these had to be submitted to the history teachers or “Gods”. A Reuters notice board was put up and the moves put on it. The Gods would decide on the plausibilty of the moves. 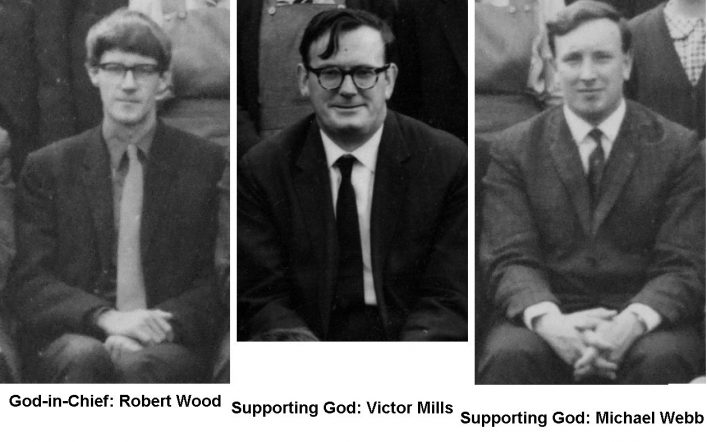 Mr Woods was I think God in chief,  vigorously supported by Vic Mills and Michael Webb. 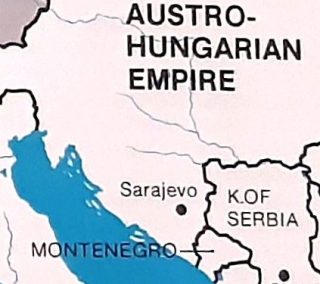 The idea was to avoid the outbreak of war – which became World War 1. Maps were provided for troop movements and so forth.

I played Franz Joseph of Austria and I have a vague recollection Tony Jones was the Kaiser or Hollweg.

It got quite confusing at times as the extensive atlas collection in the library had some contradictory place names. When that happened the gods would throw in the odd natural disaster or maverick move eg who was shelling King Nicholas of Montenegro in his palace. It was very exciting and absorbing and went on for weeks. We avoided the war and the Germans wrong footed Austria and became a peacekeeping force in the Balkans. I detected the humour of Vic Mills pervading through on occasion. 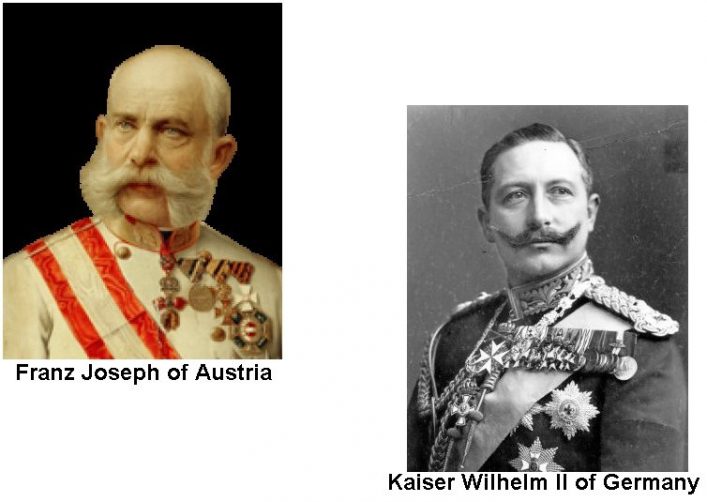 The following article is copied from the 1966 HS Magazine, published Autumn 1966. 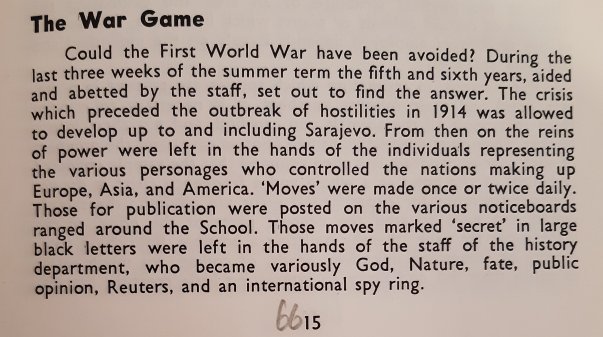 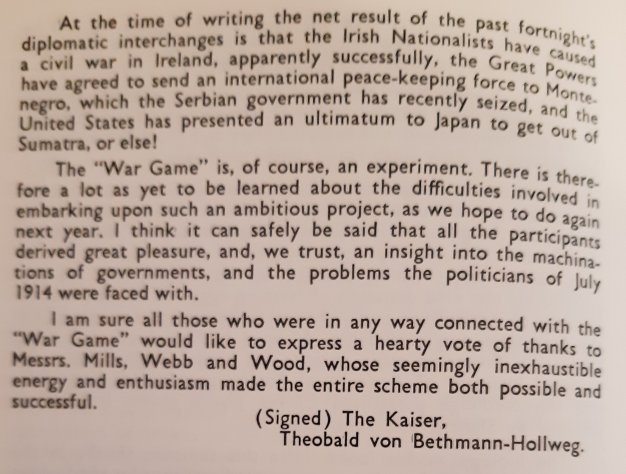 I love the school mag article written by the Kaiser! . Was the Kaiser really Tony Jones ? If it wasn’t, I bet he knows; Tony, are you out there ?

All I remember of the German team was they were extremely sly and “done emperor Franz Joseph – ie me!! – up like a kipper ” They were supposed to be allies! Germans yuk!

To be honest I can’t fully remember but I think they wrong footed us – the Austrians – I suspect the hand of the Gods – to prevent us going in – and the outcome was a League of Nations – the pre-UN force – which stopped the Germans getting in before us ! We being Austria.

Machiavellian. I think the Gods prevented world war but the Axis alliance was not that friendly. The Gods’ job was to ensure that participants behaved in character as well as in accord with the age. The Gods’ using the concept of an international peacekeeping force was well ahead of its time ! Hypocrisy ! But oh so much fun.

Reader:  who were you in this War Game ? Who else do you remember ? Where are they now ? Names that come to mind – Steven Pegg, Dennis Elliot, John Francis, John Yate.
In the HSMagazine article (above) the Kaiser wrote that he hoped to do another War Game next year – 1967 – did that happen ?

Please email Chris Swingler or Chris Hepden direct, or via admin@ourhatfield.org.uk or add a Comment as requested at the end of his article.