Since the early 1960s, Allan Richardson has been writing and performing songs – which might

have been regarded simply as Folk Songs – until you heard them and listened carefully. They were written for anyone – ie ‘folk’ – to enjoy hearing, and maybe to perform. Many of them, maybe most of them tell a story, often with humour, sometimes leaving a serious or haunting theme which sticks in your memory.

‘Hatfield’ is of the second sort. Allan’s recording has been on YouTube since 2016, and has gathered a local following amongst some HS pupils. If you haven’t heard it, try listening at:
https://www.youtube.com/watch?v=hbLwaeGBsXE

When quite recently we learned that one of our music teachers at HS – Ken Burley – had died, Allan recalled  with feeling, Mr Burley’s style of piano playing:

” What I recall most about Ken Burley was his playing of the School Song – presumably a KB arrangement of the Dyson original. (The stirring chords between the verses of course found their way into the turnround of my “Hatfield” song). He brought the same feeling to the 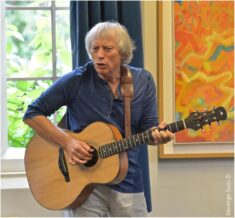 playing of hymns in assembly whether stirring anthems or the more contemplative pieces.”

If anyone would like to know more, Allan can be contacted via his website at http://www.allanrichardson.co.uk/index.html where you can also read of more of his songs, and follow links to hear some of them. the lyrics of “Hatfield” can be found at:

http://www.allanrichardson.co.uk/lyrics/hatfield.pdf   and his other lyrics can be found the same way.


NB Have you checked recently the other HS Pages/Posts listed and hotlinked in the list at the top right of this page ? The titles don’t say everything, and new edits and new Posts are being added often.