Recollections of my time at Hatfield School 1953 -1960, Janet Wheeler.

Janet Wheeler – now Reddish – was one of the first intake, attending Hatfield School from 1953-1960. Janet would be pleased if anyone wishes to contact her, or request copies of any of the photos. Please email her if you’re already in touch, or me via [admin@ourhatfield.org.uk] and they’ll forward your message to me, and I’ll pass it to Janet. This Post is submitted on Janet’s behalf and with her permission by Chris Hepden, HS 1957-64.

opened on September 6th 1953. At that point the hall was not finished nor could be used , evidenced by the scaffolding up in the year photo of 1953, due to the presence of a sink hole underneath the building.

I came from Loreto College in St Albans, a girls’ convent school, so very different environment, having been taught largely by nuns and at Hatfield largely by men.

I was also in form 1A with Mr Pidcock as our form master; I remained in the A form through to the sixth form and Mr Pidcock travelled with us. There were only eleven members of staff to begin with including Dr Hutton and Mrs Fitzpatrick the senior mistress.

From the beginning I felt the school to be very special and progressive. We were to an extent guinea pigs but I have never felt that to be disadvantageous.

During the first year, instrumental lessons were introduced with peripatetic teachers Mr Gasparian (violin) and Mr Haskins ( woodwind and brass). I opted to try violin, particularly valuable as the lessons were free and violins provided! I still play today – on a rather better instrument.

Although rather a fearsome little man, Mr Gasparian, of Armenian extraction, was a very good violinist and teacher. He once played in The Halle Orchestra. I was determined not to become one of the three out of six students in my class to be dismissed each week and so was keen to practice!  He used to hold soirees at his Ealing home, which he shared with some very Bohemian musical friends, each summer, inviting a number of his more promising pupils and their parents. It was quite an experience and a revelation as to how others lived. I continued lessons with him for a year after I left HS.

A school orchestra was formed early on, likely when Ken Burley joined the staff; we

probably sounded dreadful but it was a lovely thing to be doing. Some fairly passable concerts were performed later. Several of us were recruited into the newly created Mid Herts Youth Orchestra with pupils from other surrounding schools. Rehearsals followed by a concert were held possibly during the Easter break at a school in Welwyn Garden City.

I recall as do others the project of building our own swimming pool. The fund raising for this started from obtaining money from old newspapers which we all had to collect and bring to school. Fairly soon on that avenue became unviable and

Another adventurous project was building our own sailing dinghy, A GP14 ,under the guidance of Don Morss; it was called Dongo [from Don Morss, and Gordon Allison woodwork master]. In that connection, the school took advantage of the Herts Education Trust sailing facility in Norfolk, Barton turf on the Norfolk Broads opened in about 1955. I believe it is still there, or it was up until a very few years ago. In those early days, it was a camp site in the truest sense; sleeping tents for up to six children, a canvas canteen and kitchen, including an outside cooking fire and latrine toilets (enough said!) Much later on there were permanent buildings for all these amenities. The school booked one week during the summer holidays, though some schools enjoyed a week in term time. We were transported there in an ancient school bus [see also Postscript 3] with very uncomfortable seating, but the whole week was a marvellous adventure in those more unsophisticated days – I loved it 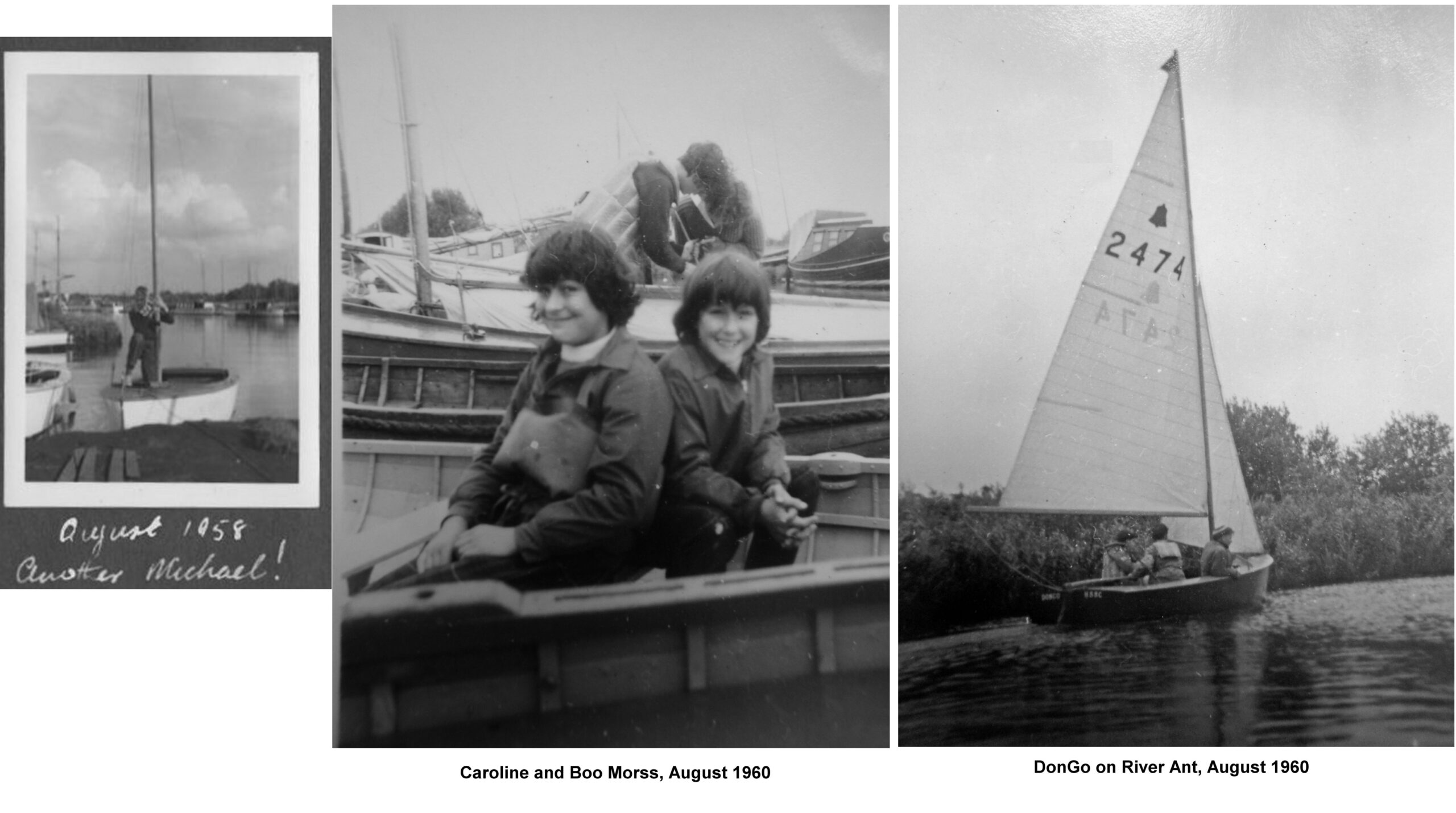 and went for 3 years, loved Norfolk and learned to sail, which stood me in good stead throughout my life. Here is a selection of my sailing memories from 1958-60. 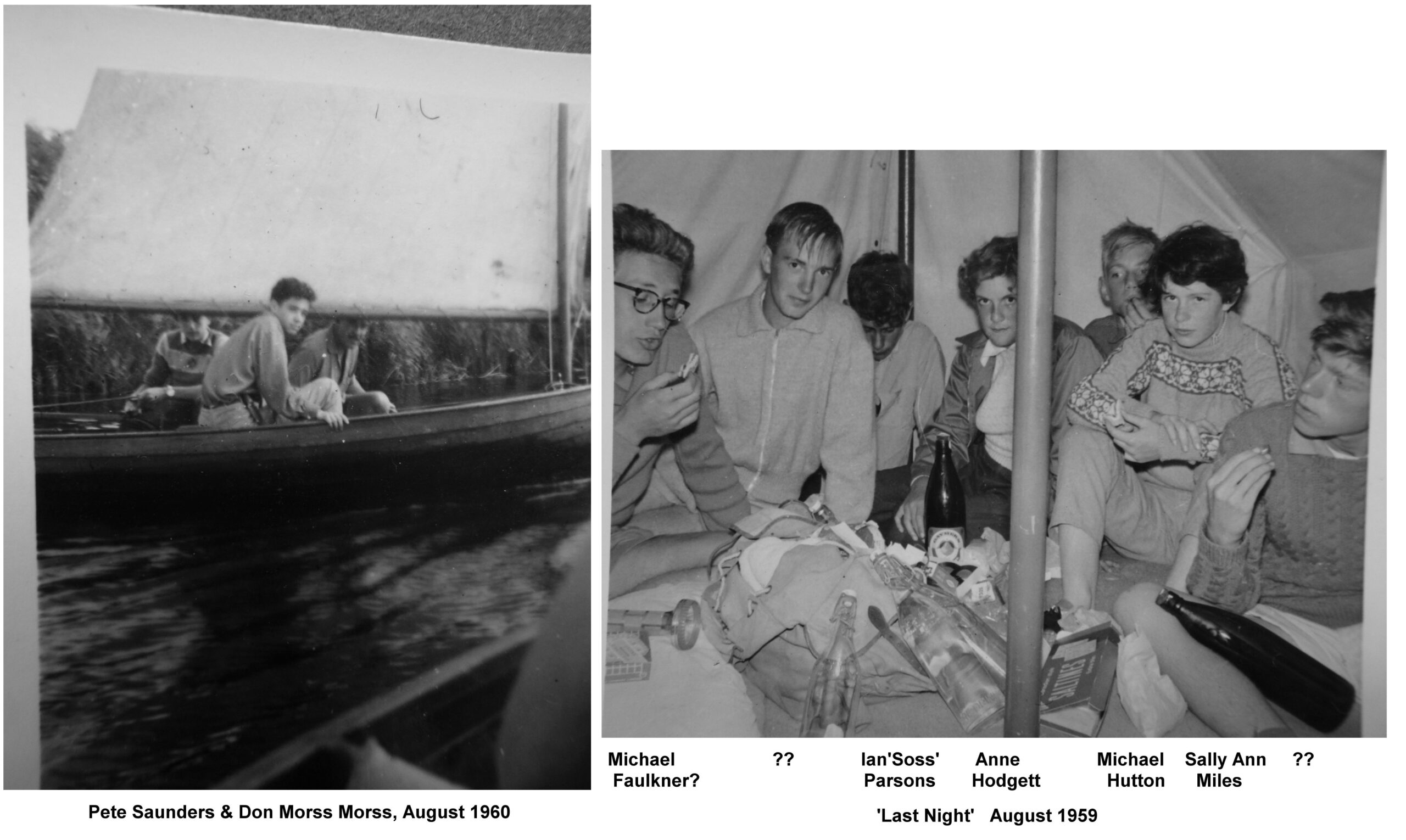 These photos of the Upper Sixth were taken in my last Summer at Hatfield School.

Postscripts:
PS1 Depending on the interest shown, Janet may add more verbal anecdotal memories to this Post in future.
PS2 If you’d like higher-res copies of any of the photos in this Post, or If you have any HS sailing memories you’d like to share, please email me or Janet via admin@ourhatfield.org. They will forward your emails to us.
PS3 July 2021: a new Post has recently been suggested, recalling adventures of/in the blue School Bus, so watch for further details, or write offering your stories.