I am writing now to submit some photos on behalf of Ivor Knight, who taught German at HS between 1958 and 1963. Ivor is now in his mid-80s, and remembers his time at HS with great pleasure and affection, not just for the friendly atmosphere, but because he met his wife there – June Lawrence, who taught PE there in, I believe, the same years. They married in 1963.
These photos are from their collection. The dates are approximate and/or estimates, so any additional info from others who recognise them, and any connected recollections from past pupils, would surely please Ivor. He has read the submissions published so far with interest and pleasure. 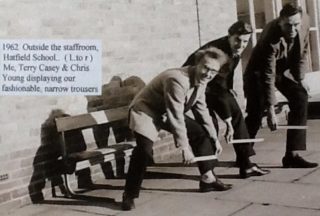 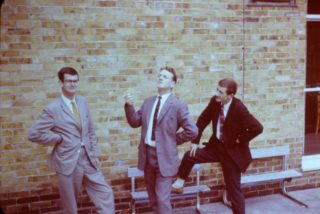 IJK03: End of term performance of David Cregan’s ‘Red Hot in Reykjavik’. Generally unbeknown to the pupils, in the initial years when the school was at Roe Green Lane, the staff put on various plays, revues, and concerts for their own amusement. This title was clearly prompted by the then recent film ‘Ice Cold in Alex’.They also made a 16mm film ‘One Track Mac’ , with the anti-hero’s

character exploiting the spiv-like image which had grown around Bryan McDowell in the pupils’ estimations. The film was screened to the pupils as end-of term entertainment. There is more info on this film which we can put onto this website later. There was at least one more film, made or started, but info is currently scarce. Bernard Mills (English), who was married to Stella Mills (English) played key roles in writing and producing both films. Maybe there were more ?

IJK05 Girls’ Hockey Team at Hatfield School; 1960-63. Photo taken by June Lawrence, who married Ivor in 1963. Several (all?) of the girls are recogniseable in the 1959 Entry panoramic photo (see later submission). 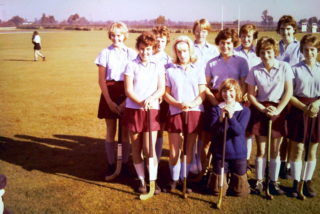 IJK06 Roland Eustis, gym master, 1957-92?. Roly was probably the longest-serving master at HS, joining in 1957, moving with others to Travellers Lane, and still there when I visited in the early ’90s. He was a very kind man with a good sense of humour, never making anyone feel they’d failed, and encouraging each of us to improve. 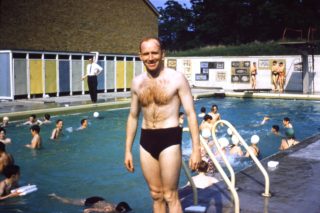 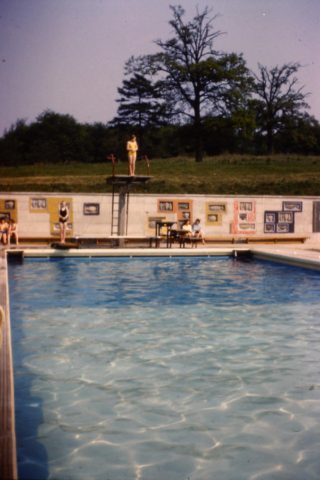 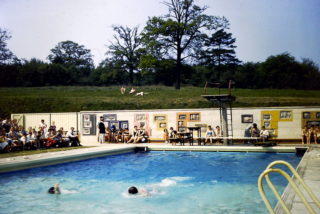 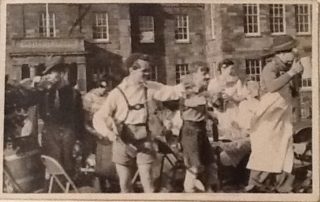 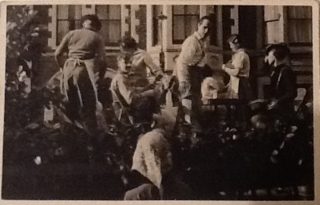 These last two photos are not of HS, but introduce a link which may interest post-’64 pupils. After reading in Lorna Joy (Bain’s) submission, posted 10/5/17 that Phillip Madoc had taught Drama (and German ?) at HS in the later 60s, Ivor remembered he and Phillip Madoc (Jones) had studied German together at Cardiff University, and has retrieved these Rag Week photos of them apparently acting out a Bayerisch Bierfest in 1953.

He writes:
“Something I hadn’t realised before was that Phillip Madoc, the actor, renowned for his part as the German sea captain in “ Dad’s Army “ and as Lloyd George in the drama by that name, spent some time at Hatfield School. A very small world indeed ! Phillip and I shared a room in “digs “ in Cardiff when we were students there. We were both studying German under Professor T.P.Williams at the time, though Phillip was a year ahead of me in his studies. Even in those days his heart was set on the theatre. I shall send you a photo of the 2 of us on the German Society lorry in Rag Week , each of us grasping a beer mug supposedly in a beer garden.”

“Even though he may not have been in Hatfield during our days, the photo may be of some interest to later students.”