Background to this article 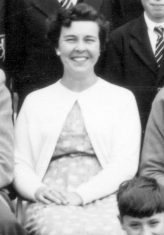 ow happy she had been at Hatfield.
This article was collated by a group of old-HS pupils and Staff, to tell Gwen’s post-HS friends and colleagues a little more about the school. It was shared at Gwen’s memorial service in 2017.

Gwen studied at Leeds University during WW2 , and started teaching in 1946. Her first post was at a girls’ grammar school at Dartford in Kent, where she worked until 1956, but with a year exchange teaching in Montreal from 1952-53. 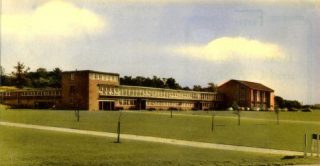 Hatfield School
Hatfield was was one of a new type of selective entry secondary school established from the early 1950s, under provisions within the 1944 Butler Education Act. They were known as Technical Schools, adding a wider range of science and technical subjects and more modern languages, to most of the traditional subjects taught in Grammar Schools. Hatfield was a mixed school, opened in 1953 under the headship of Dr Kenneth Hutton, an experienced Chemistry teacher, a Russian and German speaker, with also a passion for serious music, but with at that time – I am advised – little experience of the state school system. He had an energy and enthusiasm which he demonstrated first by his quite varied choice of staff. They were often younger than in other secondary schools, and were pleased with the fairly relaxed manner in which the school was run.
When Gwen Rees, with ten years’ teaching experience in perhaps more traditional schools, joined in September 1956, the school had grown to four years (nowadays called years 7 to 10) with a roll of about 540. By the time Gwen left in July 1964 the school had 7+ years and the roll had risen to 750. 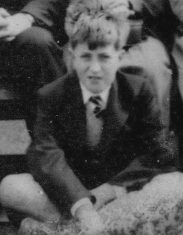 During her eight years at Hatfield Gwen probably taught 600 pupils, mostly in their junior years. She never actually taught me, but I remember her well; she was popular because she was friendly, fair, and gave interesting lessons; she was never known to have any discipline problems, and was well-known for dressing very smartly. Gwen told me recently that she enjoyed Hatfield because it was a happy school, for the staff and the pupils.
This paper may be a bit long, but Gwen and her many HS colleagues deserve to be remembered; she has set an example with her impressive network of friends.

I first met Gwen in September 1956; we were both newcomers to HS. She had taught English in England and Canada and was by then very experienced (I was not).
The four years we spent together as teaching neighbours and friends were most enjoyable as Gwen was nearly always happy and and a good companion. She also generously invited me to stay with her for several weeks, when the roof of my house was blown off by a terrible storm.
However, she had one major failing: she was always late for our social meetings. I soon learnt to turn up later! 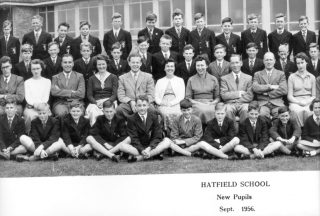 Years later when I was lecturing in the Maths department there, she joined me at Vassar College for a short holiday before travelling on to visit cousins in Pennsylvania. Gwen then spent the last few months of her American stay working in a bookshop on Fifth Avenue in New York.
On her return to England, she lived in Harlow and there she met Frank.
Though we kept in touch, I saw her infrequently from then on so I leave others to tell the rest of her interesting life. 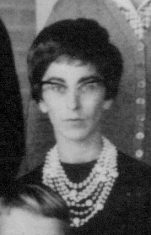 Stella Mills, English Teacher (1958-65)
Gwen Rees taught English at Hatfield School where she was one of the original members of staff in the new institution. Raven haired, small, attractive, she was always smartly dressed, favouring bright colours. Not academic, she was happier teaching the younger pupils, with whom she was very popular.
Like most of the staff she lived in a Development Corporation flat in the newly built part of Hatfield, where she entertained generously. She had a keen sense of humour and got on well with all the staff. The Head liked her too.
Gwen participated in many school activities: an active PTA member, and actress on Staff plays, and organiser of theatre trips.
Gwen was a dedicated teacher, and I’m sure her memory will live on in her many t there will be anything I can add as it was David who really knew Gwen and I only met her occasionally. Having said that, we have gone on exchanging Christmas cards right up to 2015. Hers always included a note or two about how her life was going. Last Christmas I sent a card and was touched that she responded by phone since, she said, she hadn’t been sending cards. 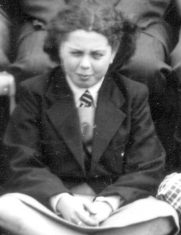 Beryl Foster (singer and musicologist), HS pupil 1956-64
Gwen (Rees) Hitchcock was one of the most popular teachers at Hatfield School during my years there. She was always helpful and interested in those she taught and her sense of humour was evident in the staff plays and films. Who could forget “Honey Pilbeam, ace reporter”, or the victim tied to the railway tracks? Most of all, however, Gwen was noted for her stylish outfits, surely the best-dressed of the female staff. We used to tease her that we only came into assembly to see what she was wearing! I was very happy, when we met again in 2015, to see that her sense of style and her sense of humour had not diminished.

I recall Gwen Rees very well as she was my form tutor in 1963/4 when I was a first year. I can vividly see her explaining to us where all the rooms were as we adjusted to the movement between lessons all over the place. I also remember her very stylish appearance – she was always really smart and I can still see the red/orange high heeled shoes which she wore with matching lipstick which must have been fashionable back then. I am pretty sure that she used to keep the scoring records for the swimming gala as I have a mental picture of her sitting with Stella Mills (another English teacher) by the black board showing the points for each house as the races were completed.

Alan was apparently a fairly rebellious teenage pupil, but much more recently, working through a checklist of possible topics to include in his FR entry, he put against Best Teacher “Miss Rees” and added several enthusiastic endorsements.
Despite his aversion to school discipline, Alan has made a successful career as a professional writer.

Ivor has kindly provided several photos illustrating his memories of some less formal moments of his time at HS.

In this cast photo of an original end-of-term staff play production in July ’59 or ’60?, Gwen is fourth from the right in the front row.

More of Ivor’s photos can be seen in a separate Post on this site.

Drama and Music – a growing tradition.
NB this section was included to give Gwen’s colleagues and friends an example of the extra-curricular activities at HS.

The friendly atmosphere Gwen and her colleagues recall was reflected in the strong tradition of the pupils and staff performing drama and music, which notable staff members developed and encouraged.
The original staff?? had planned from the first year in 1953, to follow the pattern of having a school play and several music recitals – instrumental or choir concerts.
By about 1958 new ideas were broadening this approach, to include modern styled productions, and some original ones. The names we remember first are David Cregan, English and Drama teacher 1958-63, Ken Burley, Head of Music 1957-62, and his successor John Bantick 1963-?, who laid their marks most strongly as writers, composers, producers and sometimes performers.

However the HS productions involved many more staff and pupils than simply the leading names and the performers. Even for small shows a cadre of willing and vital but unsung helpers – staff and pupils alike – produced scenery, made costumes, rehearsed the performers, and marshalled crowds of small-part actors and choruses for the larger shows – a great experience for junior pupils.
This soon created a pervasive spirit which enthused far more of us than would have participated say in traditional team sports matches.

They also wrote and acted in several Staff Plays and Films, of which most of us have only vague or hearsay memories, such as:

July 1960? Red-Hot in Reykyavik Staff Play;  a spoof on the 1958 film Ice Cold in Alex, scripted and directed by David Cregan

July 1961? One-Track Mac   a 16mm Film 16mm, scripted and directed/produced by Bernard Mills ,English teacher 1960-65; starred many HS staff wherein the unscrupulous spiv and used-car dealer Mac succeeded with his nefarious activities until finally meeting a grisly end in the empty swimming pool.
Mac – aka Leo/Bryan McDowell, German teacher 1958-62, and later final headmaster of HS.
The film had many successful screenings to the pupils, greeted by waves of applause and laughter.

Various cabaret-style entertainments were written and performed by the Staff for their own social events, and some were put on for school social events such as to entertain the sixth form pupils at the end of term.

School Productions
The following list of some of the performances between 1960 and 65, is provided by another pupil:

Dec 1959, Maria Marten, or Murder in the Red Barn   this production was directed towards farce rather than the more traditional Victorian melodrama.

Dec1960, The Importance of Being Earnest    reported in the school magazine as: Traditional Wilde styling, simple sets and presentation, good acting.

Spring 1961, Antigone   I saw that but don’t remember much about it.
Stella Mills reported in the school magazine: tragedy, modern, played on a built-out stage with audience sitting all round; actors appearing from within the audience; convincing adult performances from the actors.

Dec 1962, Lovers & Lunatics –   a purpose-written musical owing as much to WS’ ‘A Midsummer Night’s Dream’ as to the writer/lyricist (David Cregan) and composer (Ken Burley). A production which set another direction for the future.

1963? Lysistrata, – adapted/abridged?   from Aristophanes’ original; quite a racy subject for a school production, albeit a comedy.

Dec 1963, The Wind on the Heath –   another DC/KB musical collaboration with a serious side, tackling contemporary issues of planning permission for building on a Village Heath, ” For the heath is free for the heath i

Spring 1964, Agamemnon –   A bloodthirsty tale and the Chorus was trained by DC (I was the leader) From School mag report: The first Greek Tragedy at HS – mostly words, little action, certainly different. 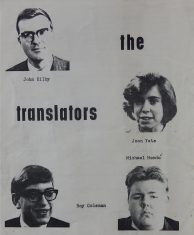 1964? Uncle Vanya, –   Chekhov – was translated by the Russian A-level Group. David Hutton played Dr Astrov and I was Helena. 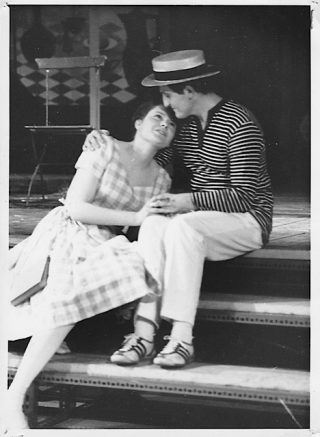 NB  Have you checked recently the other HS Pages/Posts listed and hotlinked in the list at the top right of this page ? The titles don’t say everything, and new edits and new Posts are being added often.