The 6th Form Common Room was formally handed over to Herts County Council in July 1964, having been completed and habitable earlier that year. The text gives a brief history of the Common Room project from 1961-64, and the coincident project to ‘Beautify the Quad’. At present – 2020 – we have not been able to identify the author of the original text.

This page is a copy, as faithful as possible, of the original 4-sided Programme distributed at the Presentation event on 4th July 1964. Scanned images of the leaflet, visible at the end of this page, are currently proving difficult to insert large enough for easy reading.

Presentation to the Vice-Chairman of the Hertfordshire Council, County Alderman C. C. Barker, of the Common Room constructed by Sixth Formers in the Quadrangle reconstructed by the Parent/Teacher Association. 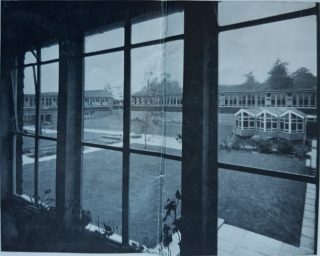 In the Autumn of 1961, for the first time, Hatfield School had over ninety Sixth Formers, squashed into only two classrooms. A group of Sixth Formers, headed by Ian Humphries, faced this situation by deciding to build a Common Room for their own use for study and recreation.
Mr. John Simms, A.R.I.B.A., the parent who had designed and helped to build the Swimming Pool, again undertook the monumental task of designing and overseeing this new project. From the start it was linked with a scheme put forward by the P.T.A. to turn the central courtyard from a depository for bicycles into a pleasing and civilised garden, and this too was planned for us by Mr. Simms. The two projects have been carried on simultaneously by teams of pupils and parents, each working in their respective fields, and only occasionally meeting in the Housecraft Room when tea-breaks coincided.
The first task, undertaken by Sixth Formers with help from Mr. Richards and Mr. Baker, was to remove and re-erect the cycle-racks outside the quad to the North of the school; these were screened by a bank of shrubs from being an eyesore to the College opposite. Then the foundations for the Common Room were prepared (and concreted to a level) after some exciting detective work to establish the drainage system. Precast reinforced concrete pillars were erected, levelled and fixed in place, and on 15th August, 1962, roof trusses, assembled in his woodwork shop by Mr. Evans, were put in position. Meanwhile Mr. Buchanan built the brick wall on which the window bays were to rest, and the other brick-work details, so that by the end of the Summer holidays the shape of the Common Room was beginning to appear. During this period a Committee including John Green, Chris Evans and Pete Moretti was in charge, with Ann Hodgett as Secretary and Gordon Swingler Treasurer.
The new school year saw the beginning of the seemingly endless task of creating the roof on Mr. Evans’s framework, and for many months Sixth Formers were usually coated with a black sticky substance which they called “ gunge ”, with which they fixed layer upon layer of roofing felt on top of the wood-wool/ concrete insulating slabs. Mr. Buchanan was at this time a regular visitor whenever anything had to be secured to a brick wall, or brickwork made good or altered.
The wall-sections arrived in the Spring after the “ Great Snow ” of 1963, and were fixed in position during the Easter holidays under the direction of Mr. Evans. About this time, parents began to come in regular shifts to re-organize the quad, with the very valuable help of Mr. Peters’ tractor, by which endless quantities of earth were shifted. Paving was laid by the South West door and two broad shallow concrete steps up to the grass were cast. Then came the laying of crazy-paving paths, and the “ hard standing ” of brick and concrete for the tables [P3 starts here]and benches. The pond, which was roughly excavated by machine, was trimmed to shape and, under Mr. Croxford’s direction, cast in concrete—a very small version of the original Swimming Pool. The greater part of the work was complete by the end of the Summer holidays, when the burning of site rubbish was made the occasion of a barbecue of sausages. Mr. Kirby began work, with pupils, making and erecting seats and benches of his own original design.

The Autumn of 1963 saw the magnificent episode of the removal of a full grown, thirty-foot, birch tree from Mr. Peters’ land at Welham Green sewage farm and its replanting in the quad. This took most of Sunday, 3rd November, and Mr. and Mrs. Richards served 21 workers with a lunch of roast beef and apple pie when the tree arrived at school. Mr. Newman, not a parent but a very good friend, lent his special equipment and his own skill and experience; and it is owing to his help and detailed instructions that the tree survived the winter and put out leaves in May 1964 in its new home. It is still watered regularly in dry weather.
Meanwhile the Common Room work continued under a new Committee including John Knighton, Michael Humphries and Eric Money, with Susan Hicks as Secretary (also together with Jean Yate tea-maker) and Peter Russell, Treasurer. A former pupil, Michael Brook, now training to be an architect, gave his help as Mr. Simms’ “ junior ”.
Glazing completed, the inside work began in the Spring of 1964, and the electricity was installed by Len Bryant in the Easter holidays. By the end of April the internal painting was done, the mural in place, water and central heating laid on, wall panelling fixed, and all was ready for the beautiful hardwood floor to be laid by Contractors on April 28th. Then came the installation of the sink and ordering of furniture and curtains; the threshold and lobby floor was made good, and the building stood ready as you see it today.
The work has cost about £1,850, which has been raised by pupils and parents through all sorts of activities, including a Sixth Form dance, a Concert given by the Toe H Male Voice Choir, P.T.A. Fetes and above all the revenues from the use of our earlier construction, the Swimming Pool. As before, people have subscribed weekly sums, parents increased by 4/- per term their regular contributions to the “ School Fund ”, and donations have been made from time to time.
As before, by far the greater contribution to the value of the project has been the unstinted work, professional or unskilled, of all helpers from Mr. Simms down to the last tea-maker.

The shape of the Common Room is not plain rectangular, but has. three window bays viewing into the Quad, and its roof is triple-pitched. These features were not only designed for ease of construction by amateurs, but to make clear that these 900 square feet were for a special purpose, never to be used as a classroom, and had been built without a penny of public money being spent on them.
It is gratifying to see that in the building plans for a new Grammar School to be built at Garston, 900 sq. ft. has been allocated for a Sixth Form Common Room, and we hope that this will become national, as it is becoming County Policy. 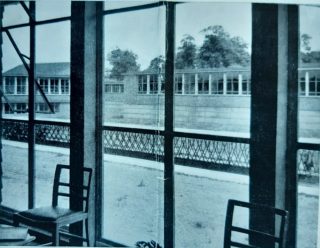 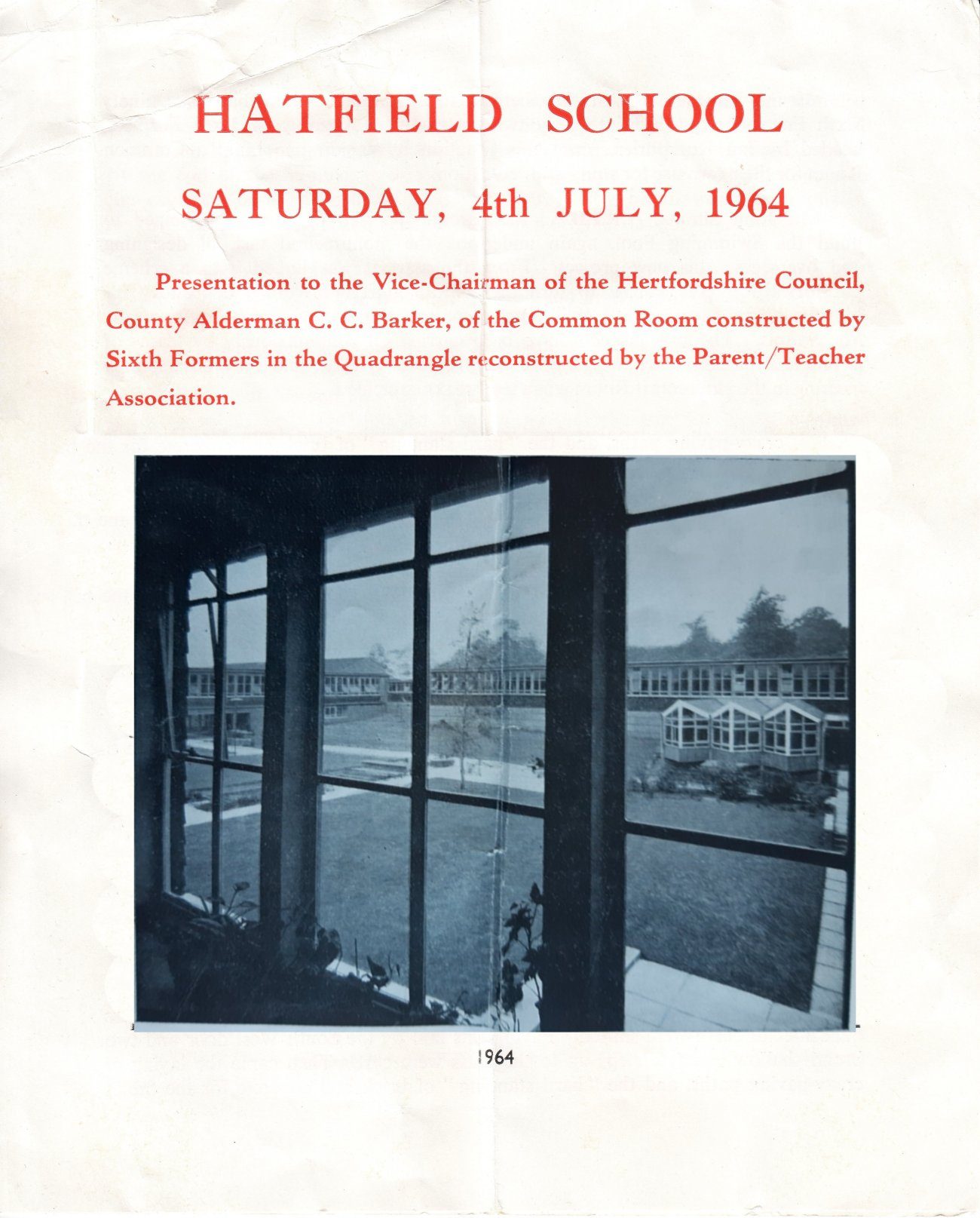 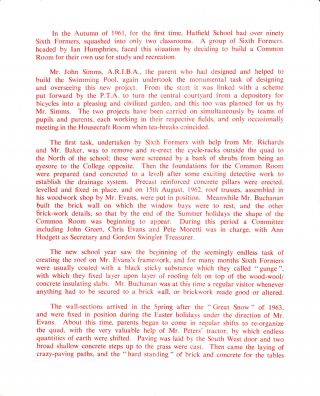 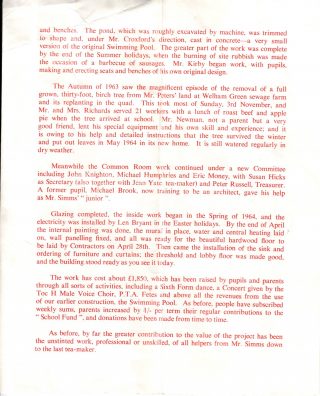 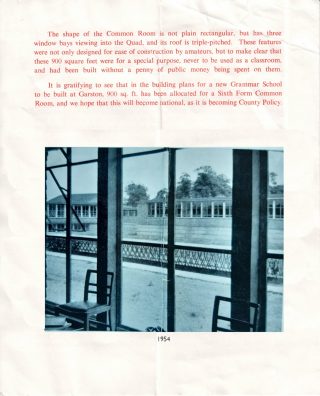 With sincere apologies July 1964s to Stella for my mixing of bibliographic allusions, I’m indebted to a stalwart friend through whose rare and invaluable combination of the acquisitive habits of Nutkin, the sociability of Rabbit, and the memory of Barbar, provided me with an original copy of this Programme. CRH.

NB2
Have you checked recently the other HS Pages/Posts listed and hotlinked in the list at the top right of this page ? The titles don’t say everything, and new edits and new Posts are being added often.