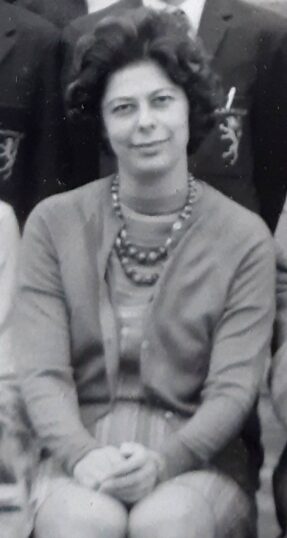 This posting was submitted on Daphne Skinner’s behalf, and with her permission, by Chris Hepden, HS 1957-64.

Daphne – Miss Skinner when we were pupils – taught at Hatfield School from 1958 when the school was only 5 years old, until it closed in 1990, so is surely one of the longest serving teachers in its history. Her recollections complement those which many pupils but only a few staff have already expressed in the OurHatfield pages.

Daphne remains well and active. If anyone wishes to contact her, please email me at [chris@wolery-crh.co.uk]

In the autumn of 1958, I was one of thirteen new members of staff, appointed to oversee the inception of a sixth form over the next two years. It was a time of great anticipation and enthusiasm, ably led by the Headmaster, Dr. Kenneth Hutton. The school had originally been designated as a Technical School, fulfilling the requirements of the 1944 Education Act. However, for various political and/or social reasons, Technical Schools were not favoured and certainly Kenneth wanted it to be a Grammar School. However, the bonus was that we had the most wonderful workshops and craft areas – Metalwork, Woodwork, Domestic Science, Art, a large gym, laboratories, a tiered demonstration room for sixth form lectures and a huge hall with a stage. Not long into the first term, Kenneth learnt that his application for three more laboratories had been granted, so one evening we all got quite merry celebrating on Madeira wine.

The enthusiasm of the staff (and parents) was quite inspirational. Everyone was so friendly, helpful and eager to add more to the school than just the daily lessons. There was Country Dancing, a School Orchestra (I sometimes played the piano), a Dramatic Society, and of course, a Swimming Pool recently built by the PTA. One of Kenneth’s requirements was that every pupil should learn to swim in their first year – and remembering how scared my sister used to be of water until she could swim, this was very wise. His other insistence was that all boys in the second year should have a term of cookery so that they could fend for themselves – and I was put n charge of developing a short course.

Then, of course, there were the wonderful evenings some of us had making the film ‘One Track Mac’. I was deemed The Continuity Girl, charged with keeping a note of the last shots of an evening and checking what people were wearing. I think Bernard Mills wrote the script and certainly Vic Hughes did the filming – and then spent hours in the dark room developing the film. Sadly, the main copy of the film was destroyed in a fire which occurred in one of the labs on the new site.

Most schools offered French as the foreign language. Not so Hatfield School, which had German, Russian and Italian for sixth formers. I wonder how many pupils remember Philip Madoc, who became a famous actor, as well as an interpreter. He and his first wife lived in Hatfield at the time and he taught Italian. He also joined in with the staff who used the pool after school hours and played badminton with the PTA one evening a week.

When I joined the staff, taking pupils on school holidays was already well established – both in the UK and abroad. It wasn’t long before I jumped on the bandwagon! I am eternally grateful to those holidays, as it enabled me to visit many European countries, all on a shoe-string, as we always stayed in Youth Hostels. The highlight was when we had so many applicants for Italy that we had to have two parties, one went clockwise and the other anticlockwise round the country – we met at a huge hostel in Naples!

After I had been at the school for seven years, Kenneth decided to become a Schools’ Inspector, much to everyone’s sorrow. His successor, Michael Slaney had a more difficult time, as about 1970 we had to move to a new site at the southern end of Hatfield. Hatfield Technical College was to become one of the new Polytechnics and needed the extra space which the school occupied. Life on the new site was very different, especially when the school became a comprehensive. The pioneering days were well and truly over.