As only a recent contributor to these Hatfield School pages – this is my third message, the first was posted on 13/11/19 – this one is a response to topics raised by several earlier contributors.

First, something which may interest several old pupils:
I have copies and of most of the New Entry photos for 1953 to 1970, and copies of Pupils’ Admissions Lists and lists of Staff for 1953 to 1966. I hope to put more info on these OH-HS webpages in the near future.Meantime, if you have any specific requests which might help your search for people, please email me via [admin@ourhatfield.org.uk] and they will pass me your message.

To Richard Clothier 1976-83, posted 26/4/19
Hi Richard,
We never met – I left HS in 1964 – but I’m impressed by your comments, showing that the ethos developed in (our) earlier years continued into your time. Also, your surviving feelings of gratitude for having been there echoes those expressed by earlier pupils, including me.
I’m thinking of drafting some recollections about the Drama and Music activities in my years – ’57-’64 – and already have some material from friends of experiences in our times. Please let me know if you’d be interested in providing some examples from your years too.

To Brian Hill 1959-64, posted 10/3/19
Hi Brian,
We must have been at HS at the same time – you’d have been 2 years younger than me, same year as Ken Staunton, Mary Hutton, Frank Smeulders, Barbara Stanley, et al. I recognise quite a lot of the faces in the New Entry photo for September ’59, but can’t match many of the names to faces.

Email me if you need info from the photos and lists I mentioned above.

To Chris Swingler, 1960 /67, posted 09/03/2019, also 29/4/17
Hallo Chris
We overlapped at HS, though I’m having difficulty remembering which is you in the 1960 photo. It’s very good to read your recollections, especially what a diverse range of things we could do, in and outside the class.
Lorna Joy (Bain) (posted 10/5/17), describes the place, opportunities and spirit perfectly. The staff I’ve kept contact with over the years all have similar recollections, and were happy there.

I too remember when in 1958? the School started sponsoring a Displaced Person through the Ockenden Venture – there is still info about that initiative on the Net somewhere. He was Tadeusz Szimkovjak (must check spelling), originally from Poland I think. There are School Magazine articles about some pupils meeting him in the in about 1959 or ’60. I’ll search later. I assume Kenneth was the driving force in proposing sponsorship – although most of us knew from our parents of some personal experiences of WW2, sponsoring a Displaced Person made us think much harder about how ordinary people had been affected.

I wonder if any of the pupils who met him kept in contact with Tadeusz, and now what he has done in the last 50+ years ?

Thanks for your final year class photo – including Victor (History)Mills, presumably your form master. I recognise you easily, though I doubt we knew each other well – your year occupied a somewhat unapproachable position when we were first-years. Your less-than glowing recollections of five years at HS must be deeply etched into your memory, or you wouldn’t have written three times !
I’m glad you enjoyed sailing (see later); I was a convert too but a bit later. It’s stayed with me until other circumstances forced me to stop and get rid of the boat only a couple of years ago – a sad loss.
I hope your cancer was diagnosed early enough for you to be getting effective treatment; you must have been told that although it’s not always cureable it’s increasingly surviveable. I was lucky – a persistent and knowledgeable wife, a terrier-like GP and excellent surgeons, and I’ve had no recurrence for ten years, ‘though I keep up regular checks.

Lorna, your compelling and passionate contribution posted 10/5/17, should be edited into the introductory text of this webpage, to show how it really felt, and clearly still feels to many of us. I hope your gifts of expression, in four or five languages ?, have brought you well-deserved success in the years past.

I joined the sailing activities quite late, in about 1962, encouraged by David Hutton, and have vivid memories of travelling after school and at weekends to the HSSCA base at Rickmansworth in the school Utilabrake – the Hutton family’s semi-retired bus – to sail the GP14 and other dinghies stored there, notably 2 fibreglass Bosuns – which I learned later were designed to survive sail training or Royal Navy novices, including launching by dropping over the side of a ship.

As already recalled by several commenters, the School GP14 dinghy was built in/near the Woodwork shop, and when it grew too big, in a ‘lay-by’ in the back corridor, before being launched in the swimming pool in 1959? The leading staff on the project were Don Morss (Maths) and Gordon Allison (Woodwork); the boat was named DonGo, presumably combining their names. I’m trying to remember who officiated at the launching. In those days it should surely have been the wife or daughter of the owner, but I’m not sure.

Ken, Graham John, and David’s recollections, and Ken’s article in the School Magazine in ?1958 ? cover school sailing activities and people more fully than I can, but the following bits may be of interest.

The person justly remembered by everyone for teaching sailing is Don Morss, who I believe led the activities from 1958? He was a larger than life character – I believe he’d already had a distinguished career in the Royal Marines ? He was very approachable, and once met, most people were naturally drawn under his spell – impressive but not intimidating, radiated common-sense, taught with sympathy, and possessed a cultured voice, of parade-ground power when needed. It may often be an ill-used phrase, but he was surely a natural leader. He must be sadly missed. The attached photo was cropped from the September 1959 New Entries Photo. 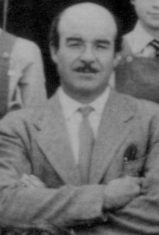 ‘Turf’ was – is I hope – Richard Bramley, a boy old and wise before his time, 2 years younger than me, who joined the second year at HS in September 1960. He was amusing, and got along with anyone. He’d sailed before coming to HS and was therefore a natural guide to novices like me, of any age. I wish I knew what he’s done/been since we were at HS. I believe his family had a farm near Harpenden. The attached photo was cropped from the 1966 Sixth Form photo. I hope he won’t be too upset at this fond resurrection of his nickname. 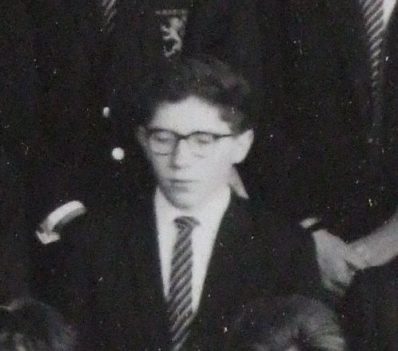 Dear Lorna, I know my old friend David Hutton is planning to put a copy of the Hatfield School song on this webpage very soon. He was collating the info for it in November but was delayed by illness. He may also include some history of how KH got the song written.
I’ll remind him, unless it’s already in the queue for publication.; keep watching !

Hi David, You wrote about Stella and Bernard Mills. You portrayed her well, say up to our fourth year – she brooked no slackers, but if she thought anyone had some potential she was just as formidable in encouraging them. She was also a very effective form mistress to us in both years of the sixth form.

I never had much contact with her husband Bernard, ‘though it’s now clearer that he was her hidden strength. He had unpublicised skills too – he did much (all ?) of the filming and editing of the movies the staff shot in their spare time. I found out much later that ‘One Track Mac’ would never have happened without him.
I saw Stella several times after his sudden death in 2014, from which she never recovered; they’d been devoted and she couldn’t move on at all; she died in 2018.
Regards, Chris

Hi to all – , unless you’ve still got a rolled-up print somewhere, email me if you’d like a soft copy of the September New Entries photo for your year.

Thanks Peter for such positive warts and all memories. The original intakes didn’t have a monopoly on establishing the traditions. The one of having a good try at almost anything we wanted to start was maybe the best one of all because it seems to have continued, after you and I left anyway.
KH may have been strict, but had the gift of dealing quickly with our misadventures, and then getting us try harder. He chose a lot of good staff as well who weren’t satisfied with simply following the book. For a man who wasn’t a traditional sports team player he managed to develop amazing traditions to apparently last until the school closed.