Janice Herrington taught at Hatfield School from 1971-1990. If anyone wishes to contact her, please email me via [admin@ourhatfield.org.uk] who’ll pass your mails to me, and I’ll forward any messages to her. This Post is submitted on Janice’s behalf and with her permission by Chris Hepden, HS 1957-64

When I joined the staff in September 1971 – almost 50 years to the day – I was a newly qualified Geography teacher and some years later was appointed Deputy Head, when Molly Fitzpatrick finally retired. I seem to recall Molly was on the staff from the school’s inception – and gave many years of loyal service, along with the first Head Kenneth Hutton. Sadly, I never had the opportunity to meet Kenneth but he was fondly remembered by the many staff who had worked with him over the years.

It was a very exciting time for the school, as it moved to newly built premises at the southern end of Travellers Lane. Hatfield Polytechnic was therefore able to expand onto the old site and eventually became the University of Hertfordshire.

How fortunate I was to start my teaching career in a brand new school! At the same time, the school became ‘comprehensive’, thus welcoming its first ‘all ability’ intake. This proved to be a challenge for us all but particularly for those members of staff who had previously only taught in the Grammar school sector.

So what are my lasting memories of my time there? I guess it was the many firm friends that I made over the years – and I am still in touch with many of them. Also, the opportunities I was given to travel to Europe, accompanying various school trips to Paris, Amsterdam, Solingen (Germany) and Kitzbul (Austria).

But the most memorable must be the Second Year Outdoor Activities week based in Eskdale Youth Hostel, Cumbria. I once calculated that I had ‘lived’ in Eskdale for almost 6 months of my life whilst at Hatfield School! It was a wonderful opportunity for pupils to spend a week away from home – for many it was the first time – in the beautiful landscape of the English Lake District. The annual trip was well established when I arrived in 1971, a joint effort by Michael Slaney (Headteacher) and Rowly Eustis (Head of PE). Michael had lived and worked in Whitehaven, on the western edge of the Lake District, for some years before moving to Hertfordshire, and knew the area like the back of his hand.

The school somehow managed to subsidise pupils whose families weren’t able to afford the week away, as well as providing walking boots and waterproofs for all weather conditions, for everybody. The week was spent exploring the remote and unspoilt Eskdale valley and beyond.

Weather conditions were very variable – there were snow blizzards, torrential downpours, mist and thick fog, and occasionally sunshine, but as far as I can recall we all came back in one piece.

It was a culture shock for many. There were no hot showers, no TVs, and only one payphone in the foyer to phone home! Everybody had to take turns sweeping out the communal rooms, peeling potatoes for 30 plus hungry hostellers, and washing up after dinner – there were no dishwashers in youth hostels in those days!

It was a magical experience, never to be forgotten by those that went – which was just about all of the Second Year (now Year 8)

I like to think maybe as a result of our regular visits, the YHA built a classroom at the back of the Hostel: in response, Michael Slaney, Sue Daniels (History), Edward Harrison (Biology) and I (Geography) wrote and published a book in 1979 called Exploring Eskdale to inform and encourage other school parties to visit.

As well as exploring Eskdale, the Geography Department organized many GCSE and A Level field trips to Swanage and Weymouth in Dorset, masterminded by Chris Young, Peter Green, Colin Tattle, Judy Gwilliam, Phil Lenten, and me.

It would be lovely to read other reminiscences of these occasions. ………

Sadly, the school closed in July 1990. Its changed location left it out on a limb, and I’m sure that contributed to its demise. To commemorate the school, mugs were presented to all remaining staff and pupils.

I moved on for another sixteen years as Deputy Head at Longdean School in Hemel Hempstead (an enjoyable and challenging end to my teaching career) before retiring to Brighton in 2007. 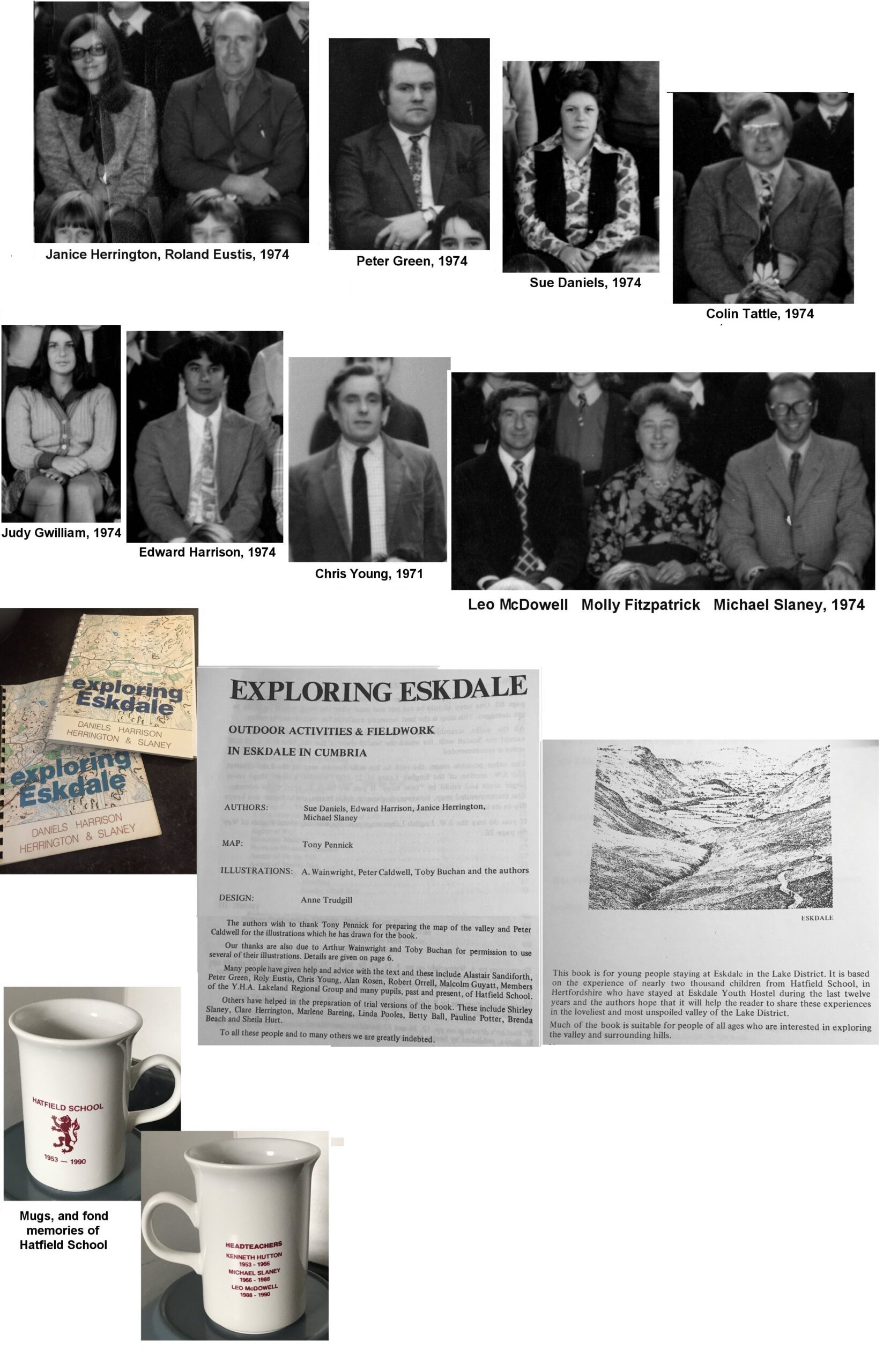 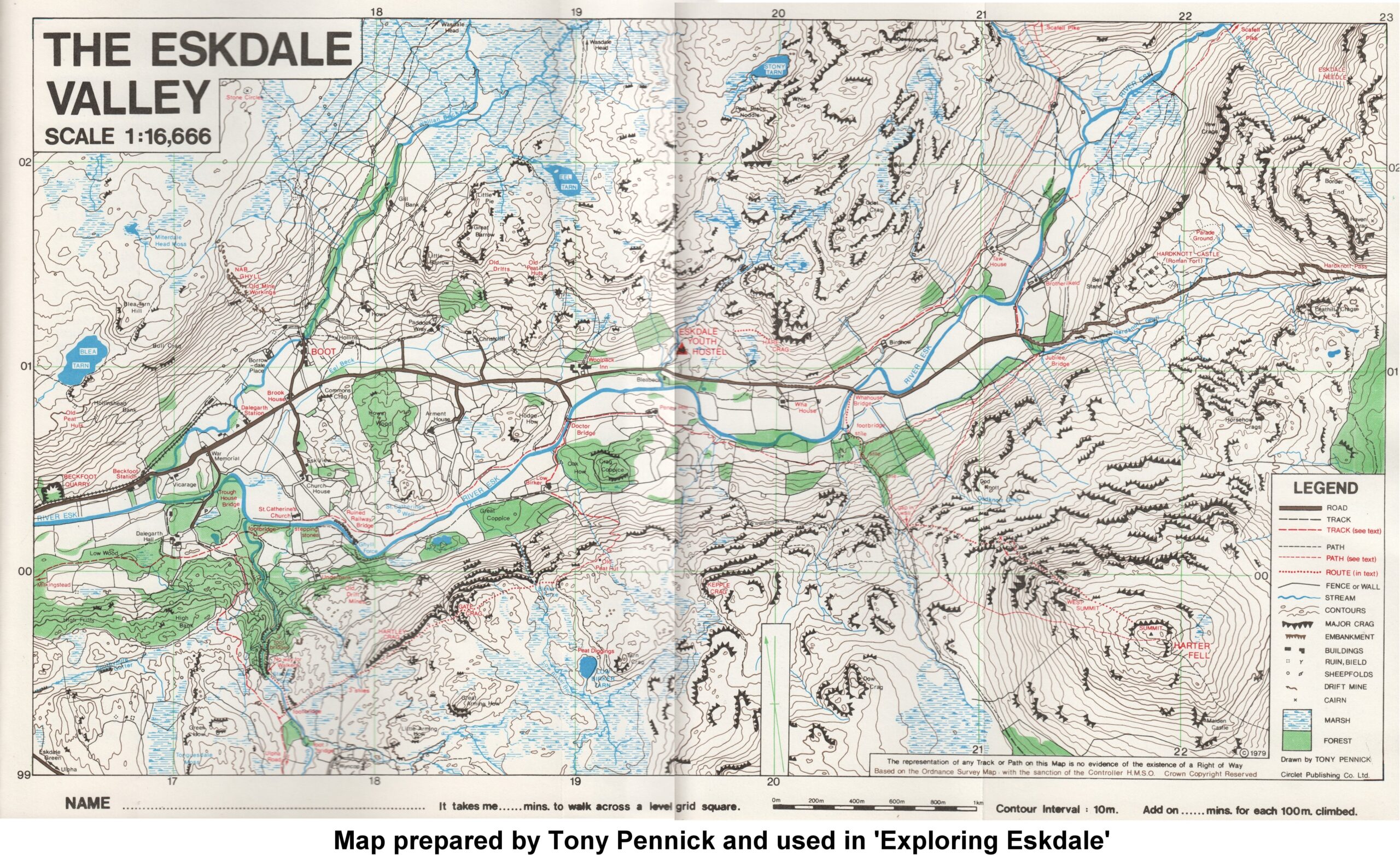 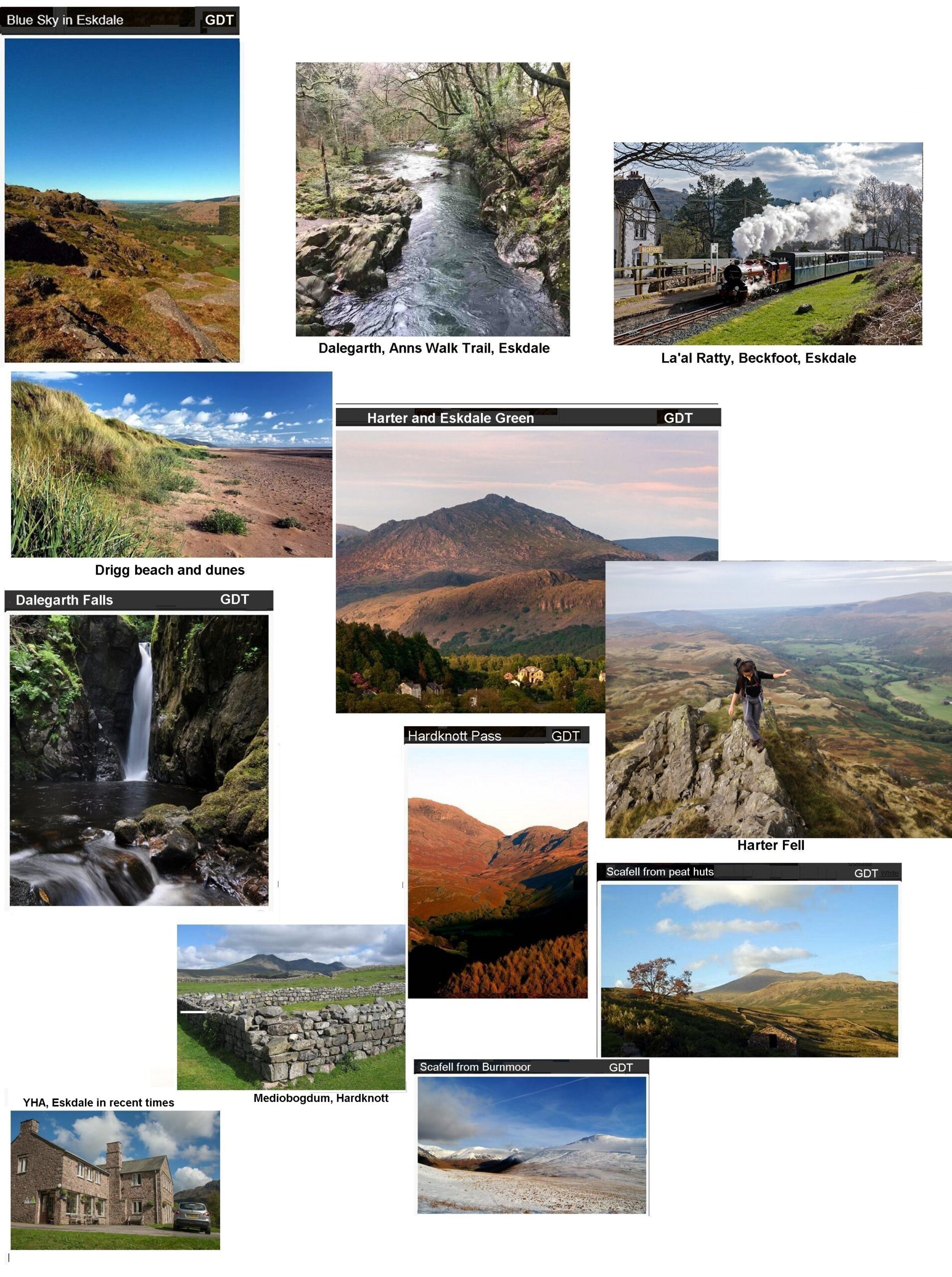 Acknowledgements and other notes
Sincere thanks to Gareth Thornley for permission to use some of his amazing photos (marked GDT) of the Eskdale  area.  His full collection can be enjoyed at http://www.gareththornleyphotography.co.uk/, which is also linked to the www.eskdale.info website.

Exploring Eskdale – the book mentioned in the Post. If anyone would like to read it, or some extracts, Chris Hepden now has a copy which he could scan, and send by email or WeTransfer. Please email your request as described at the start of this Post. Write also if you’d like higher-res copies of any of the photos.

Many thanks to Chris for extracting photos of the staff mentioned in the post, from the Hatfield School New Intake photos 1971, 1974 and 1978. Also for ‘trawling the Internet’ for the stunning photos of Eskdale! JH