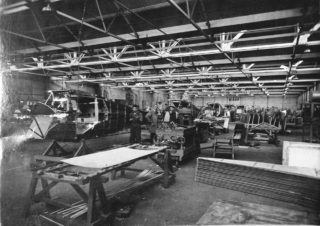 Hangar at either Stag Lane or Hatfield

I attach a photo rediscovered when clearing my father’s  home in 2005. It is an obvious aircraft construction hanger but was it at Hatfield or the earlier Stag Lane factory. I remember my father saying they were building “Cubs” and I think one of the men in white aprons could be my father (Thomas (Tom) Browne).  He  started at Stag Lane in 1935 just 3 days after being interviewed for the job.. He  moved to the Hatfield factory in 1936 and worked there until retirement in 1977.