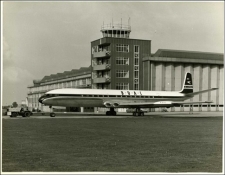 While looking through some old newspapers on microfilm at Hertfordshire Archives & Local Studies I came across this article about the Comet Hangar which is one of the few remaining buildings that refer back to Hatfield’s aviation past.  The building is now Grade 2* listed and is owned by the David Lloyd fitness and leisure clubs.

Biggest Aluminium Building in the World Will house fleet of Comets

The new hangar will house the Comet jet airliner awaiting delivery to customers or under minor adjustments after test flying.  It has a floor area of 66,000 square feet, sufficient to house six airliners with comfort and eight at a pinch.

A spokesman for Alum Ltd. of Farnham Common told the Welwyn Times “The main advantage of these hangars is that they can be put up so quickly compared with hangars built of other materials:  de havilland’s have this hangar completed within twelve months of asking for it”.

“This is the second hangar of this kind that has been built in the country.  The other at London Airport is a small one.  So far as I know nobody else is doing this kind of thing”.

The light weight of the materials makes for ease of transport and quick erection.  The main part of the hangar was erected by eighteen men in thirteen weeks using only two land-operated five-ton cranes and little scaffolding.

The constructors, Structural and Mechanical Engineers Ltd. who also built London airport hangar were responsible for the ‘Dome of Discovery’ at the South Bank exhibition with its 312 feet span.

De Havilland’s hangar consists of twelve aluminium alloy portals each with a span of 217 feet and giving a floor width of 200 feet.  Electrically-driven concertina type doors give an unobstructed door opening of 200 feet wide and 15 feet high.

A big asset of aluminium hangars is that they do not require periodical stripping and repainting.