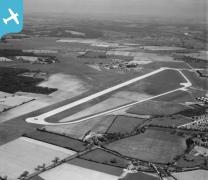 Hatfield Aerodrome from the South 1949
Britain From Above

Geoffrey de Havilland, was a pioneering aircraft designer and founder of the de Havilland Aircraft Company. He purchased some farmland close to Hatfield, as his existing site at Stag Lane, Edgware, was being encroached upon by expanding housing developments in the London suburbs. This move would become extremely valuable to Hatfield and its citizens. Flying commenced in 1930, but the clubhouse buildings and adjacent recreational facilities, fuel pumps and sheds were not completed until 1933. However by the time of creation it boasted a multitude of employment for the people of Hatfield.

During the  Second World War, de Havilland was most noted for its Mosquito fighter bomber, the famous ‘Wooden wonder’. This was developed privately at Salisbury Hall, outside of Hatfield to avoid being targeted by German bombers; however was tested and worked on in the Hatfield Aerodrome. The Hatfield site itself was camouflaged but was bombed on 3rd October 1940 by a Junker 88; disrupting production of the Mosquito. (See Hatfield at War).

Relocation and Removal of the Aerodrome

Sadly in 1992, due to severe financial problems, British Aerospace announced a halt to aircraft production in Hatfield from 1993. Friday, 8th April 1994, marked Hatfield’s last day as an airfield; a  De Havilland Chipmunk, the type that had made the first landing on the new runway, was also the last plane to take off from it. Over six decades had passed of its use as an airfield; it had become very valuable to the war effort, survived a German bomber attack and was to blame for one of the greatest success stories of the War, the Mosquito DH98.

Today the flight test hangar survives as a Bannatyne leisure centre, whilst the rest of the site is divided between the  University of Hertfordshire, housing and the Business Park. A heritage walk has specifically been put in place to commemorate this towns heritage; the University of Hertfordshire suggest to all students to take the Heritage Walk, especially the Humanities students when starting their course.