Seven Other Old Schools in Hatfield 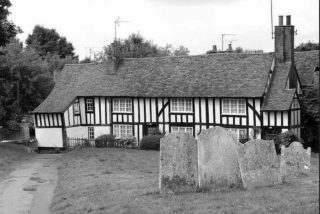 This school was run by Eliazer Burchell and was located at the corner of Churchyard (now called “Church Cottage”). The school was there from 1760 until around 1777. Burchell was schoolmaster to Master Cecil (afterwards 1st Marquess of Salisbury).

The School House at Puttocks Oak appears on a Tithe Map of 1838 and belonged to Rev. Benjamin Peile. It may have been an infants’ school. The Rev. Peile died in 1842 after which the school house was taken over by the National School which was previously located at the Market House in Fore Street.

Thomas Smith ran a writing school in the North Road in 1839.

Founded in 1875, the school was located in the Chapel, the east end being parted off during the week by a curtain. The Chapel, commonly known as the “Mud Chapel” had been built by the 2nd Marquess of Salisbury in 1861. It was situated in Homestead Lane on the edge of where the playing fields are now. The Mud Hut Chapel was replaced in 1882 by the Chapel of St Mary Magdalene, built by the third Marquess of Salisbury. It is not known when the chapel ceased to be used as a school.

Mrs Harriet Leyland was mistress of a Free School for boys and girls in Park Street around 1851.

The Misses Caesar ran a private school at Galleycroft around 1920.