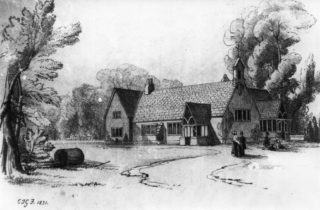 The London Road (National) School was built by public subscription in 1850, the year the railway came to Hatfield. It was located on a section of the Great North Road roughly where car showrooms stand today near the junction with French Horn Lane. From the drawing (right), the main road had not yet been diverted to run immediately in front of the school.

The school was initially for girls and infants but, after the building was extended in 1854, boys transferred to the school from Puttocks Oak. In 1882, average attendance was 400 with great over-crowding. At that time, Mr H. Page was master of the boys’ school and Mrs H. Page the mistress of the girls’, with Miss Sophia Avery in charge of the infants. Mr Page left in 1888, replaced by Mr. W. Whitby. By then, Miss E. Carter was Mistress of the girls’ school,

In 1904, the overcrowding was eased by the erection of a new building at the top of Endymion Road. It was opened in 1905 for the boys while the girls and infants remained in the London Road premises. In 1907, the name was changed from London Road Schools to Church of England Schools although, not long after that, the boy’s school was starting to be called St Audrey’s School.

In 1913, the infants moved to the Countess Anne school building in Church Street under their head mistress Mrs. B. Bottomly (née Houghton). This left just the girls in the London Road building which continued to be criticised as “hopelessly out-of-date, unhygienic and unhealthy”.

On 8th September 1924, the girls followed the boys to St Audrey’s School in Endymion Road where the two departments amalgamated to become a mixed school. The London Road building was then used for a variety of purposes – occasional classes, adult education and as a local branch library. The London Road school building was eventually sold in 1935.

The original London Road School had a bell tower in which a bell hung until 1935 when it was bought by past pupils and presented to St Audrey’s School in Endymion Road. The bell survived the 1944 bomb and was re-hung in the rebuilt school in 1946. It moved with St Audrey’s to Traveller’s Lane in 1957. The original London Road School building survived into the 1960s. It was used by K.C.V. Precision Tool Co. but later demolished as part of the Hatfield New Town development.