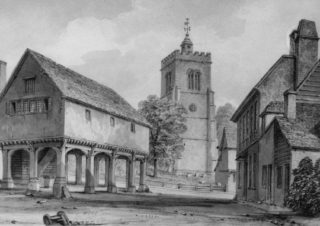 The Market House, with school-room on the upper floor

As early as the 1700s, Hatfield had two charity schools, Countess Anne’s Charity School for girls and another one for boys. The latter may have been the forerunner of a National School in Fore Street, known to have existed in 1839 with James Austin as its Master. It was probably located over the Market House which stood in the Market Square opposite the Church Gate, between the East Indian Chief and the Gatehouse which was then the Salisbury Arms.

The school transferred to a school building at Puttocks Oak which had belonged to the Curate, Rev. Benjamin Peile. The move took place after Peile’s death in 1842 or perhaps later when the Market House was destroyed.