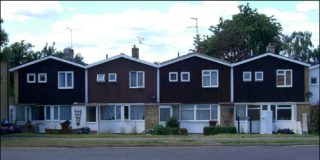 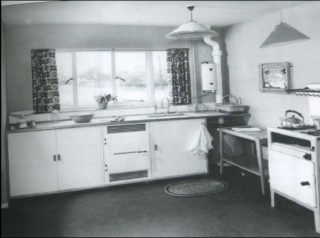 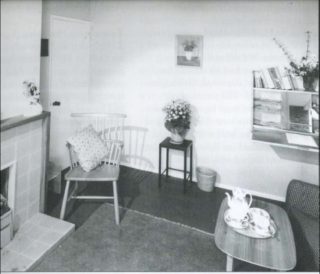 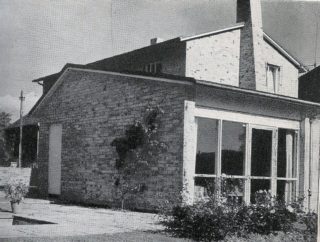 Barbara Hutton chose a terrace of four houses in Roe Green to illustrate the first housing in the New Town. These are the same four houses in 2008, virtually unchanged over fifty years later. The first 124 houses and 81 flats at Roe Green were built at cost of £252,464. The Rents, exclusive of rates were, £1- 2/- per week. As building labour was at a premium and in order to recruit a building force, houses were allocated to men engaged in this work. This system operated until 1953 by which time the corporation felt that there were sufficient builders living in the town.  On 7 April the Parliamentary Secretary for Housing opened the first 3-bed terraced house for rent. A Show-House, completely furnished by the Council of Industrial Design, was opened to the public. Over the following year it was visited by over 4,600 people, including Hatfield residents, Government Departments, Local Authorities and overseas visitors.

The houses had an open plan, the staircase leading straight up from a room which had a dining area at one end and sitting room the other. They had an asymmetrically balanced facade, one larger window balancing two smaller ones on the upper storey. There were only load bearing party walls to each house, the front and back walls being merely skins of lightweight heat insulated material. This was the consequence of a national shortage of bricks which forced Lionel Brett to devise types of houses requiring few or no bricks in their construction

Freda Whittaker, writing in “Woman’s Outlook “  (1953) observed: “Pastel shades of yellow, green, pink and blue (front doors) add gaiety without being blatant, and everywhere trees and grass verges add nature’s restful complement of colour. Roofs vary from slate grey to red, deep yellow or golden brown. Here there is a close of charming red brick houses; there a golden brown streamlined block of flats; there a group of “ Swedish” houses with wood fronted upper storeys above brick, enlivened with asbestos panels in varying colours beneath the ground floor window…………. Some houses have the combined dining and living room running the length of the houses. A housewife I visited …. preferred this, saying that in the one big room everyone could be warm in winter and yet have room for different pastimes. Another home I saw had a cosy living room opening into a dining recess and yet another had glass doors leading from sitting room to small dining room. Kitchens, small but adequate, were purely working quarters. Coal storage indoors, cased in bath, electric points in all rooms, airing cupboard, slow burning living room fire with back boiler and radiators were all features which struck me. I was disappointed that not all houses had a separate lavatory and bathroom, and a common drawback was a naked dustbin by the front door – though some houses have a brick recess built into the wall to conceal this rather unsightly object. An excellent idea in some of the larger houses is the tradesman’s locker, fitted into the side wall near the door. It is painted the same colour as the door and here the housewife can be sure of finding her groceries, bread or fish if she is out when the delivery van calls.”

In May of the following year Harold Macmillan, the then Minister of Housing opened the first block of flats in Pondcroft, and in August work began on a further 456 dwellings in the Roe Green area.   To the Development Corporation’s satisfaction, the Roe Green housing won the 1954 regional Housing Medal and Diploma for Lionel Brett.   A survey of tenant satisfaction found:-

(1)   The through living room with plenty of glass and light is well liked in preference to two independent rooms, but there are no clear cut views on whether the dining/kitchen  option is preferable to the dining/living.

(3)   Back gardens of 45 feet depth are sufficient but every 7th tenant requires an allotment.

(4)   Every 4th tenant owns a motor car and the provision of garages is inadequate.

(5)   The great majority of tenants consider a refrigerator a necessity.

(6)   Small two bed roomed houses with the staircase leading out of the living room is preferred as a feature.   However, Government funding was limited.  The Development Corporation announced that the houses in Hatfield were costing too much to build and proposed to cut costs reducing the storage areas and cutting out second lavatories.

At the same time Lionel Brett and his partner Kenneth Boyd designed the first private house in the New Town, for Mr. & Mrs. Simmons at 11 Cranborne Road. This was part of a deliberate policy on the part of the development Corporation to foster a mixture of public and private housing. In their annual report for 1953 they wrote that:  “The Development Corporation is anxious to avoid any risk that Hatfield shall become a purely artisan town and they have therefore introduced some better class development including 36 houses which, when completed during the coming summer, will be offered for sale”.  Roe Green was considered complete by 1955 and attention turned to the second of the  proposed seven neighbourhoods that at South Hatfield.