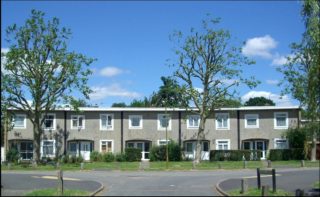 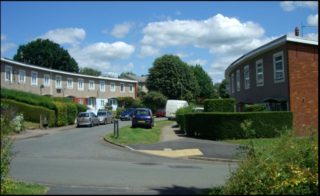 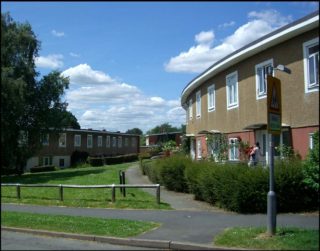 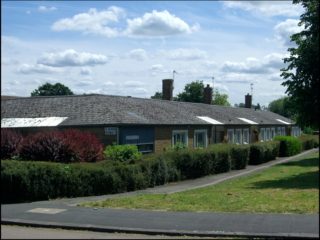 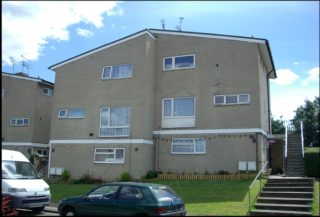 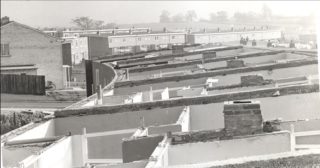 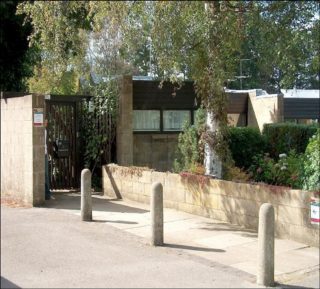 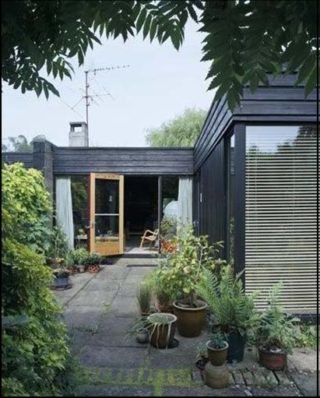 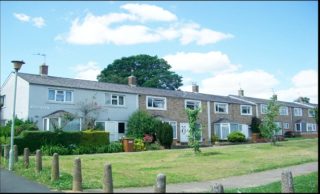 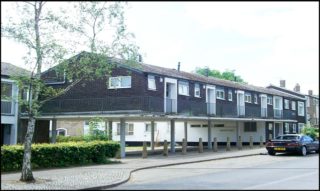 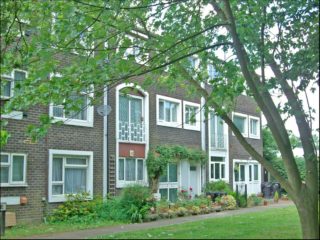 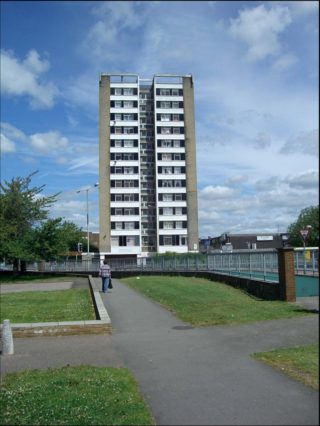 The designated site of the New Town straddled a north-south ridge between the Barnet Bypass and the railway. South Hatfield was designed to exploit the ridge. The main distributor road, Bishops Rise, runs along the spine of the ridge. On the steep western slope, the houses run along the contours in a series of sinuous terraces, taking advantage of the views over the Colne valley. On the gentler, eastern slope, the roads run across the contours.

South Hatfield was originally designed in 1951 for a population of 3,500 at a density of 37.5 persons/acre. However delay had been caused by the need to construct the Colne Valley Trunk Sewer. Construction Work began on South Hatfield in 1955 and the first houses  were finished in June 1956.  957 houses had been built by the end of 1957.  383 of  the houses in Hazel Grove were of an experimental, non traditional type built of no-fines concrete .  175 more conventional, traditional houses and 30 flats were of brick construction.

A recent trend had been towards providing bungalows, which were in demand, not only with the old or the needy, but with all types and classes of people. It was decided to build a substantial number of bungalows in South Hatfield. This in turn led to an influx of parents of people who had moved into the New Town, particularly those from the East End of London.

The success of the first ‘generation’ of New Towns led the Government to consider a second tranche to relieve pressure on other major cities such as Birmingham, Manchester, Liverpool and Newcastle. Hatfield suffered budget cuts as the Government diverted funding to these second generation New Towns. Housing quality suffered.   Increasing development costs continued to dog the Development Corporation. An analysis of over 2,500 families found that all but 11% could be housed in two-bedroomed houses. This was despite the fact that :

“ The most popular type of house for the small family appears to be the three bed roomed for four persons which is, in effect, practically the same overall floor area as a two bed roomed house as regards the downstairs but with one double and two single bedrooms instead of two double bedrooms upstairs. While cost still tends to limit the overall size of the house, there is yet room left for variation of the internal layout and in the fittings. It has been found that by contrast with earlier generations, the ‘best parlour’ is no longer a  ‘must’. ….. The more open style of house is now preferred, with a living room running from back to front of the house and a view through the windows at either end. But one must not overlook the fact that the day will dawn when the children may need a room of their own. ……. Where economics allow, it is usual for the Corporation to provide one bedroom with a radiator operated off the back boiler and supplemented by an electric power point. ….. Cupboards are liberally provided and have proved welcome to young tenants with heavy furniture bills to pay; however it is customary to leave one bedroom without a cupboard so that Aunt Maggie’s wardrobe which they have inherited can be fitted into that room. ….. Experience is that many housewives are not prepared to carry the dustbin to the front of the house on emptying days. …. There is no known inducement that will make the English housewife do that which she does not wish.”   The increased expectations of residents were met, to an extent, in 1956 when the Development Corporation began to offer fridges for hire at 2/6d per week. 47% of residents took up the offer. At this time 71% of the residents used gas for cooking and 29% electricity . Of the 2131 houses which had been built since 1950, over half had been let to workers from the de Havilland factory.   South Hatfield, the second of the seven neighbourhoods, was well underway by 1957 and the development Corporation turned to the third neighbourhood, The Ryde. Announcing that “The time has now arrived for some more expensive housing to be introduced into the town”, the Corporation decided that The Ryde should be devoted entirely to private housing targeted at young executives.

The next area for public housing would be Oxlease, but even here land was set aside for self-build private housing in Cedar Road. By the end of 1957, 136 houses had been completed in Oxlease

The end of 1957 also brought the housing in Hatfield to national attention.   Over the night of 3/4 November high winds stripped the roofs off houses in South Hatfield. 28 houses lost their roofs completely, 18 partly and 47 showed signs of damage. A Public Inquiry into the storm damaged properties in South Hatfield was held the following May and found that the problem was a result of architectural and construction failures. The houses were of cheap construction costing about £1,400 each and had been built on an “exposed hillside”. They had mono pitch roofs at a 6 deg. angle with overhanging eaves front and back. The roads ran along the contours and funnelled the wind, with the mono pitch of the roof to windward. (Houses opposite, where the pitch ran in the other direction were not affected.) Reports were of winds between 58 – 90 mph but the Inquiry found that the maximum gusts were 70 mph. The design of the roofs were such that “… any aeronautical engineer would recognise at once as possessing critical aerodynamic properties.” Half of the roofs were sucked off as a complete unit. Brick chimney stacks 1’6” square and 2’3” high were thrown distances of up to 70 feet. Five sixths of the cost of repairs had been recovered from the contractors and architects, this was all that was legally recoverable, the balance was made up by ex-gratia payments, costs of removals and compensations paid by the Development Corporation to the tenants .

There then followed a run of bad publicity for the housing in Hatfield. On 14 December 1958, 6 houses were flooded due to an exceptionally heavy rain storm. In 1959 damp patches appeared on the bedroom ceilings of a number of properties, again in South Hatfield. The trouble was due to condensation on the underside of the roofing. Several methods of overcoming the trouble were tried and it was finally decided to lay a felt membrane over the roof timbers, which meant taking the roofs off 279 properties.   Together with the  Willow Way roofs, all of this proved immensely damaging to Lionel Brett’s practice and he resigned as Chief Architect in 1959.    By that time there was a shortage of new houses, putting the development programme behind target, due to delays in completing 204 units in Oxlease. The Batterdale sewer was also late in completing, holding up potential redevelopment work in Old Hatfield. As a consequence, the Development Corporation reported that because of “ the somewhat uneven flow of houses becoming available, it has not always been possible to assist those who apply for transfers for various reasons, such as children in flats, overcrowding, ill health, or merely a wish for a better house.”

As mentioned above, one way to get a house was to build your own.   On 26 January 1962 an advert appeared in the personal column of The Times: “Anyone interested in cooperative venture to build a group of imaginative homes for own occupation….. please write…”   It had been placed by Michael Baily. As a result of the advert Baily and a band of like minded progressive thinkers formed a housing Group. This was the start of the Cockaigne development on The Ryde.   “ We had no money and no land. Without money we could not buy land and without land we could not raise money.” – Michael Baily.   In the quest for land he had written to every local authority in Greater London, but to no avail. Eventually he wrote to Hatfield Development Corporation who offered a strip of land on the Ryde, adjoining the railway line. The 2.75 acre site had been intended for 10 conventional houses. In the end the site was used to build 28 on 22 ft by 124 ft plots. The Hatfield Urban District Council gave a £150,000 loan for the construction.

Cockaigne was about building high standard houses at minimum prices. Private citizens collectively commissioned the development. The proposal was Co-ownership with 40 year mortgages.   The Cockaigne bungalows were designed by Peter   Phippen, Peter Randall and David Parkes. They subdivided the long and comparatively shallow site into narrow strips, forming courtyard house types with open plans and flat roofs. East – West party walls ran the full length of the property.   External walls were 6.6” high. The garden courts were considered to be “rooms without roofs”. Essentially open plan, sliding and folding wooden doors meant that much of the internal space could be partitioned at will and room functions were interchangeable. This basic plan was extremely flexible and could be adapted for 4, 3, 2 or 1 bedroom versions. Compressed straw decking was used for the roofs, partly because it was inexpensive, but also because it was an innovative way of using a waste material. The external walls at the front and back were faced with timber tongue and groove boards stained black. The party walls were of concrete blocks and the internal walls clad in soft wood board. The floors were laid over under floor heating. Roof-lights lit the internal spaces.

The first residents moved into the Cockaigne bungalows in February 1966, including Michael Baily and David Parkes. 4-bed units were priced at £6,400 each.   In December 1998, English Heritage awarded the Cockaigne bungalows Grade II listed status. And in 2006 they won the Historic section of the Housing Design Awards. The award citation said that: “ The Ryde had immense influence. More, it demonstrated that people on modest incomes could get high quality homes through co-operative  endeavour and that the New Towns could play a role in making sites available for such schemes”.

Equally enterprising, but this time in the Public sector was the housing in North and South Down Roads by Tayler and Green.   Tayler and Green design 234 dwellings and 96 flats on 15 acres in North and South Down Roads. There were 6 house types ranging from studio flats on raised walkways to three storey town houses with integral garages, all in load-bearing brick with reinforced concrete floors. The elevations were in a variety of patterns in yellow, cream and black facing bricks. Garage blocks were separate from the housing so that back gardens could be private with no rear access. The roofs sloped with the site rather than stepping, as an economy measure. Linking walkways tried to emulate a ‘ village street’ feeling between Northdown and Southdown Roads.

The Architectural Review commented: “ Tayler and Green’s scheme at Hatfield compels admiration…. for going the whole pastoral hog – a miniature Noddyland, yet probably nearer to the genuine village street….. the picking out of individual dwellings is very close to being popular housing, but the way in which the roof line of the whole street is tugged downwards like a forelock shows that the architects still have the marionette show at their fingertips and no-one else’s.”

More prosaic, but equally innovative was Hatfield’s first multi-storey block, Queensway House (66 1-bed flats on 13 floors) by Ronald Ward. The building is a concrete frame of linked beams, with the external walls a mere skin fitted on to the  frame. It was opened by Keith Joseph on 19 September 1962.

While this was going on, the Government was having a radical re-think of its approach to the New Towns.   In 1961 it had set up a property arm called the Commission for the New Towns (CNT for short). The CNT’s remit was to maintain and enhance the value of the land in the New Towns and the return obtained from it. By 1965 the Government had determined to vest all responsibility for the running of the New Towns in the CNT and announced that the Development Corporations would be disbanded in April 1966.   At the time the Development Corporation was dissolved, the population of Hatfield stood at 23,200.