2. Origins of the New Town 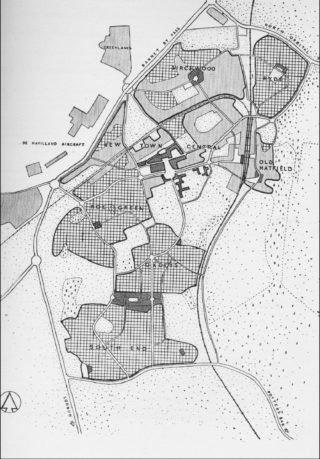 Hatfield New Town was a direct consequence of the Greater London Plan produced by Patrick  Abercrombie during the Second World War.  In 1927 Neville Chamberlain was Minister of Health and used that position to set up the Greater London Regional Planning Committee. When war broke out, and Chamberlain was Prime Minister, he had the foresight to anticipate the need for reconstruction of the capital after the war. Abercrombie was commissioned to prepare a Greater London Plan. His report was published in 1943. In it he identified that :” for families with children, houses are preferred to flats. They provide a private garden… and fit the English temperament…. but to put everyone in houses would mean that people would have to move elsewhere….” His proposal was for eight new towns to be built roughly 20 to 35 miles from the centre of London.  In October 1945 the incoming Labour Minister for Planning, Lewis Silkin appointed a committee to advise him on how the Abercrombie Plan should be implemented. At its head was John Reith, the former Director General of the BBC.  Within three months the Committee had come up with interim recommendations:

2. They should be built by public development corporations.

3. They should directly be funded by the Exchequer.

4. They should form a ring around London, separated by a “Green Belt”.

On August 1 1946 the New Towns Act received royal assent and by 11 November the first New Town, Stevenage, was officially designated. Bracknell, Basildon, Crawley, Harlow, Hemel Hempstead, Welwyn Garden City and Hatfield soon followed.   The economic driver behind the choice of Hatfield was the de Havilland Aircraft Factory, and the businesses which supplied it. They were to provide the employment for the new population.   Hatfield received its formal designation as a New Town on 20 April 1948 and a Development Corporation was appointed, under the chairmanship of R. G. Gosling. For convenience, because of the proximity of the two towns, it was decided that the same Development Corporation would also look after the interests of Welwyn Garden City.   The Journal of the Town and Country Planning Institute described Hatfield and Welwyn Garden City as “Twin communities ” under the same development corporation but maintaining individual identities.   At the time Hatfield’s industry was well in excess of its Housing and 65% of all workers in Hatfield were employed by the de Havilland aircraft factory. The New Town area was restricted by the arterial roads such as the Barnet Bypass to the west, and Hatfield Park to the east. It was seen as a closely knit old town with unplanned modern spread to the west. The existing development had been uncontrolled, with the Old Town adjacent to the Great North Road and newer development west of the railway along the road to St Albans. 20th century ribbon development had taken place along the Barnet Bypass, and there had been some residential development associated with the aircraft factory.   The area allocated for the New Town was to the west of the railway line, 1 mile wide, 31/2 miles long between the Barnet Bypass and Hatfield Park.   Lionel Brett (Viscount Esher) was commissioned to prepare the master plan for Hatfield. The New Town would be the smallest of the New Towns covering an area of 2,340 acres with a planned population of 25,000.   The Master Plan was unveiled and put on public exhibition in the summer of 1949 before being sent to Lewis Silkin for approval on 31 October that year.   Because there was a single objection to the plan (from Hatfield Rural Council), a public inquiry was opened on 24 January 1950. It concluded that the proposal should go ahead and in April fields to the west of Briars Lane were compulsorily purchased, including three farms which were bought from the Gascoyne Cecil Estates for £41,500.   A tender was then sought for houses and flats in Roe Green, the first development in the New Town.   When work began in August 1950, the population of Hatfield was 8,500.