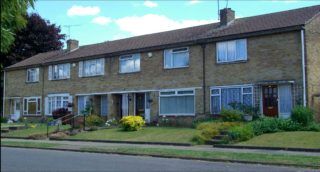 Maryland: This terrace no longer has any original doors or windows and replacements are different in each house.
David Irving
Strawmead: Crop Common
David Irving
The Broadway: Old Hatfield
Christine Martindale 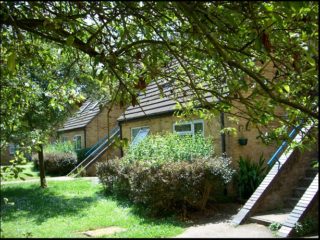 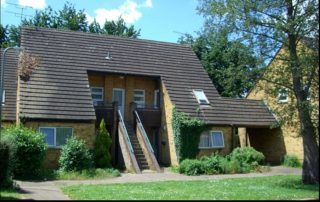 The transfer of assets took place in April 1978.  Welwyn Hatfield Council discovered that as well as the assets of the CNT, it had also inherited the liabilities. There were substantial maintenance problems, which led to delegations from the Council to the Ministry of Housing, with limited  success.  One detrimental effect was the Council’s decision to replace most of the windows in the housing stock with ‘maintenance free’ UPVC. This meant that most of the narrow mullioned critall steel windows were replaced with thick mullioned plastic ones. This was compounded by the fact that the original fenestration patterns could not be replicated in plastic. In tandem with this, the Right To Buy legislation meant that a substantial number of previously tenanted properties were bought. The new owners stamped their own personalities on their houses. Porches were filled in. Front doors were changed. Bow windows appeared. Rendering was decorated in a wide range of colours. Some houses were even reclad in artificial stone. While seemingly innocuous in each individual case, the cumulative effect was to change the character of the fifties terrace blocks and, in some cases, completely destroy the original aesthetic intent.  To compensate for Right To Buy the Council began to build more housing for rent. From the start, it’s approach was to use innovative designs to provide mixed housing estates for a range of family sizes and for single people

The site of the former Hatfield Football Club in Crop Common was used for over 100 courtyard houses designed by Glan Lewis and Mike George. While the courtyards are too small to be really effective, it was a brave attempt to achieve very high densities while still meeting Parker Morris standards.

In 1979 the site of the former Grays Garage, in Old Hatfield came on the market. It was purchased by the Council. The site is extremely steep and crossed by a right of way known locally as Jacob’s Ladder. The Council commissioned Consarc Partners to produce a scheme for the site. Proposals for 51 flats, bedsits and houses at first met strong opposition from local residents, on the basis that (a) it was to be a council development and (b) it was too dense. But the design was carefully tailored to fit in with its setting in the Old Town and used broken roof lines and a mixture of building materials to try to achieve a look that blended with the older buildings around it. It is now regarded as one of the better developments in the town.

Among the last of the Council’s developments was another innovative scheme at Redhall Close, South Hatfield, designed by David Irving. Another high density development, this incorporated a range of dwelling sizes, mixing studio flats with 1, 2 and 3 bed flats and maisonettes in a form which allowed everyone to have their own private access.

Private development continued on various sites across the town. In February 1984 the Estates Gazette recorded a record price for residential land in England and Wales : the Mount Pleasant Lane development. The 6.6 acres had been bought by Costain Homes for £2,000,000 (approx. £300,000 per acre)   Though there was no formal date at which Local Authorities were stopped from building housing, gradually over the period of the Conservative Government in the 1980s, the ability for them to directly fund housing diminished and, with the implementation of Right To Buy, the size of their housing stock also reduced. By the end of the decade the District Council was no longer building housing, though it continued to enable Housing Associations to do so by releasing land from its land bank.   The stage was set for the Private Developers to take over housing provision in Hatfield.