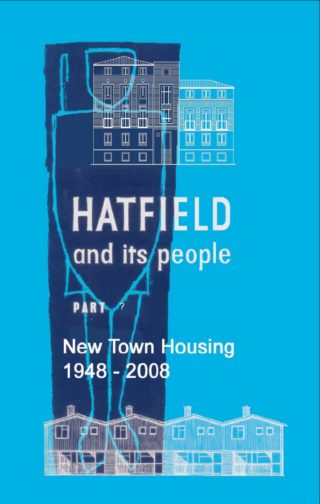 Part Ten of the “Hatfield And Its People” series (republished in 2014 by Hatfield Local History Society) concerned houses in Hatfield from 970 a.d. up to the opening of the first houses in the New Town in the early 1950s.  Articles in the Housing topic attempt to outline the development of the New Town and the changing nature of the housing from 1948 to 2008.  As Barbara Hutton (who wrote part ten) pointed out, although Hatfield has a few delightful houses, most styles are represented by rather plain and ordinary types, there are few buildings to make the connoisseur exclaim. What was true of the buildings up to the 1950’s is equally true of those built over the subsequent fifty years.  So, too, has been the nature of the houses. Like those described in the earlier volume, they have been of all sizes and many different plans and, like the earlier volume, it is impossible to examine every kind.  The growth and design of Hatfield New Town has been controlled by successive developers, each of whom has taken a different approach to the delivery of housing in the town. We have divided this overview into sections looking at the work carried out by each of the developers and commenting on those houses which we think are either typical, or distinctive in each period.