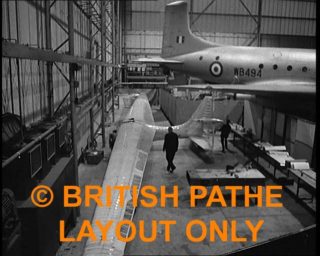 Around 1960 or 1961, there was a competition organised by the Royal Aeronautical Society with a prize for the first man-powered aircraft to fly one mile at least 10 feet off the ground for the whole flight.

My husband Frank, was sometimes asked to help with the ‘Puffin’, the aircraft that was being built at Hatfield for this competition. I remember that the plane had a very large wingspan and looked very beautiful when it was in flight. It was powered by just one man pedalling. As it was being built at Hatfield, which was being used as a commercial airfield, it was only possible to make practice flights early in the morning or in the evening after all the commercial flights had finished. Being a fragile craft, it was also important to have calm weather conditions, which didn’t happen too often. I remember my husband being called out very early one morning to help wheel out the aeroplane for a  practice flight – he took my son with him to help out and I went along to watch.

The Puffin was the first aeroplane to fly for half a mile 10 feet off the ground. The plane flew in a figure of eight. We had a party to celebrate, but of course we did not win the Aeronautical Society prize for this, even though it was a great achievement.

An American won the prize for flying a mile. The American team had had many more opportunities for flying their plane, both because of the calmer weather conditions where they were and because they were not based at a commercial airfield. There was a celebratory party held in Kent for the American team and all the Hatfield team went to the party.

See the Puffin on Pathé News

Click on the following link:- http://www.britishpathe.com/video/flight-by-npower/query/hatfield+puffin [link opens in a new tab]