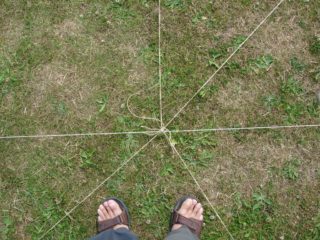 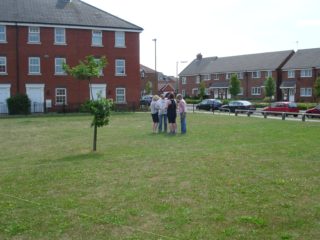 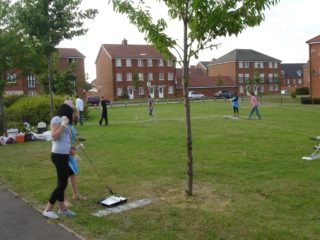 Learning what to do
George Woodcraft

On a lovely summer evening in June 2010, the residents around Horsa Gardens in Salisbury Village in Hatfield came out to paint! Artists from Digswell Arts Trust came to mark out a pattern which represented the layout of the aerial navigational beacons which covered the south-east of England before the invention of RADAR.

The last remaining beacon was on a building now demolished on the old airfield before Salisbury Village was built and it will be returned and displayed on a site on university land when funding permits. In the meantime pupils at Green Lanes and Howe Dell Schools have been making replica Beacons (see Welwyn and Hatfield Times, May 19th, 2010) and now the residents have been painting the pattern on Horsa Gardens. “The painting took a couple of hours to set up and nearly three hours before we ran out of the 70 litres of paint we used”, said project leader Anji Archer “We lost count of the number of people who actually did some painting as some went early, but there were 30 in the end of project picture”. Jason Blight brought the youth group that meets in the Community Centre and them more and more people joined in.

The following day Geoff Collins kindly used part of his flying lesson to come over and take photographs of the completed work. The work was also celebrated in the exhibition at the University on the following day, which exhibited the beacons the school children had made and showed all the other work that went into the project Flight Test Hangar, the culmination of which will be an ‘art book’ to be published in July.