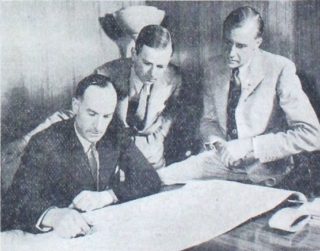 The photo shows (left to right) Captain de Havilland and his sons Peter and Geoffrey. The sons were to fly a DH 90 entered by their father, in the Kings Cup Race which took place on Saturday 7th September 1935 at Hatfield Aerodrome. The Advertisement for the race and the picture appeared in the Welwyn Times on 29th August 1935 page 8.