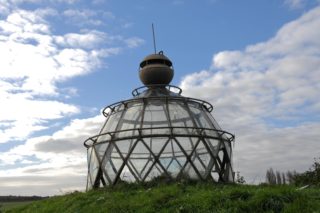 The Hatfield Airfield Beacon
Photo from University of Hertfordshire Archives

A Life-Saving Beam of Light

In 1934 an important navigational device, the Beacon, was placed on the roof of the recently completed squash courts belonging to the London Aeroplane Club. A white flashing light shone from the beacon after sunset and was used by pilots who were navigating their way back to the Aerodrome for landing. Prior to this, pilots would use landmarks to help identify where they were such as railway lines, roads and certain buildings. In clear weather the beacon’s light could be seen up to 38 miles away and so became an important part of the Aerodrome. Although the introduction of radar during the Second World War meant that the beacon was no longer needed to aid pilots with navigation, it still remained in place until 1988.

In 1988 the beacon was removed and placed in the North Weald Airfield Museum and as far as we know this beacon is the last remaining pre-war beacon of its type in existence. Plans to have the beacon bought home to Hatfield are underway and in the near future the beacon will be placed near the University, where Mosquito Way meets Dragon Road. Financial support was given by the Hatfield Historical Society and The Heritage Lottery Fund, who provided a substantial £11,000 towards the cost of purchasing and restoration of the beacon. This financial aid twinned with the support and donations from the public and enthusiasm from the Welwyn Hatfield Times means that the beacon will be bought back to Hatfield. This beacon will become an iconic monument that will represent Hatfield’s heritage and it’s impressive aviation history.

Ben French’s association with de Havilland at Hatfield started in 1931 when he had a ten minute flight in a Puss Moth G-ABLD as a twelfth-birthday treat. Ben French tells one story about how the beacon saved one pilots life who was training at the de Havilland School of Flying. As it started to get darker there was still one Tiger Moth aircraft and one pilot that were unaccounted for. He had set out on a cross-country flight and was long overdue. When the pilot finally returned he explained that he would not have made it back to the aerodrome if it had not been for the flashing light of the Hatfield beacon which he could see on the distant horizon.