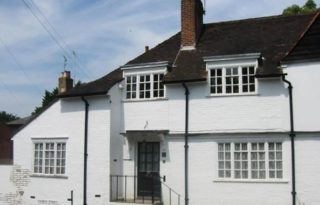 The Bakers Arms in Church Street (previously Back Street) was once a busy public house.

Its first mention was in 1850, when it was owned by George Bradshaw and his family who were also owners of the Newtown Brewery. They ran a bakers and a beershop from this site, from where the Bakers Arms took its name.

It remained in the Bradshaw family until it was aquired by the Hatfield Brewery in the 1890’s.

In 1891, the residents of the Bakers Arms were John Kentish and his wife Elizabeth, who ran the bakers and public house. Their thirteen year old son John, worked as a bakers assistant for his father, and the building was a family home for their younger children, ten year old Edith, five year old Christina, and Edward who was three.  The business also employed a cook and housemaid.

In 1904 there was growing concern as to the great number of public houses in the town, and as licenses came up for renewal in the following years, many were refused. In 1928 seven licences were refused in Old Hatfield, the Bakers Arms being one of them, and the doors closed for the last time. The building now is a private house.