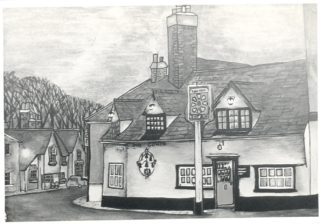 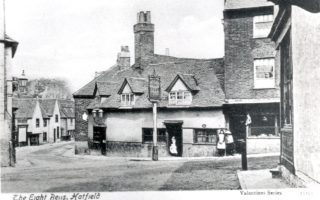 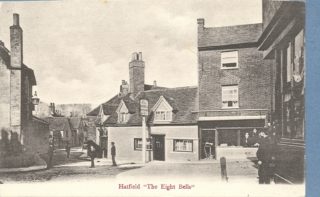 Hatfield has an abundance of public houses, a hangover from its prominence within the early days of coach travel. The Eight Bells is the oldest pub in Hatfield and is on the corner of Park Street and Fore Street. It is now a Grade II listed building. The Pub dates from the 17th Century and was of great importance as a staging post on the Great North Road. This road linked London to the North of Britain. Coaches would leave The Eight Bells at 7am every day. Staging posts were important as they allowed the traveller to rest and change horses if necessary.

The Eight Bells was formerly the Five Bells and changed its name at some point between the 1730s and 1756. The name changed in accordance with the changing number of bells in the nearby Church, St Etheldreda. The pub has retained the name of The Eight Bells despite the fact that the Church now has ten bells.

Charles Dickens famously visited Hatfield in 1835 when reporting on the fire that killed the first Marchioness of Salisbury. The Eight Bells is widely accepted as being mentioned in Dickens’ famous Oliver Twist. Although not mentioned by name, Dickens refers to a ‘small public-house’ in Hatfield, undoubtedly The Eight Bells. It is in this ‘small public-house’ that Sykes, the villain of the tale, calls for a drink after he has murdered the character of Nancy.

Rumours suggest that Dick Turpin, the famous highwayman, also visited The Eight Bells. One tale suggests that he jumped out of a window and onto Black Bess, his horse, to escape from the Bow Street Runners.