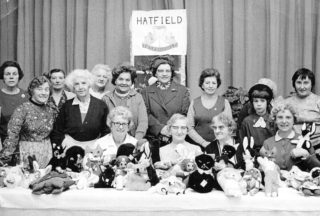 This is a photo of the members of the Trefoil Guild which was taken in 1969 and was at a sale of their work in the Memorial Hall after a soft toy making competition. Thanks to my sister in law, Rae Browne (nee Hutchins) and her cousin Jean Cross, I am able to give the names of all the members.  As you will see from the list our parents were members of the Guild; and at this time we think my mother Beryl Browne was the Chairperson of the Hatfield Group a position I know she held for about 20 years.  All these ladies would had been Girl Guides as teenagers and they used met in the Guide hut in Ground Lane.

I know a good percentage of the ladies in this photograph will be recognised as long term members of a number of other organisations in Hatfield.  I recognise many of them from my time as a teenager in town in the 1950s; when they were active like my Mum; who was also a member of the Mothers Union and the two Women’s Institute branches right up to her death at 76 in 1991.