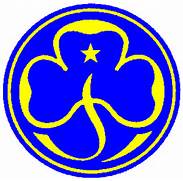 I became involved in guiding as an adult, never having been a Brownie or a Guide, through my children. My eldest daughter, Sally, joined the 2nd Hatfield Brownies and as often happens they were short of adult help and I volunteered as a Brownie helper.  Later Birdeen Groom asked me if I would take over the 4th Hatfield (St. Johns) Guides from Mrs Eileen Jordan at Skips Grove – a guide and Scout hut paid for by both fundraising/parent contribution and council grants.  Unfortunately it was subjected to vandalism almost from the beginning and was finally removed in 1977.

I later became Division Commissioner for Central Herts (which was a very steep learning curve) – an area which covered Welwyn and Hatfield to Potters Bar, Radlett, Borehamwood and Elstree – all with varying problems and differences and was invited to many events across the division.  I retired from Division commissioner after five years and took my last role as Chair of Hatfield Trefoil Guild.

As a guider I was priviledged to be part of so many activities.  We camped as a District with other Guide Companies (of which we had 5 at one time).  Among the most memorable were camping trips – both within Hertfordshire and further afield at Botley (in Hampshire) and Rydal Hall in the Lake District during one of the wettest weeks anyone can remember.  We were also pioneering in joining with the scouts from Skips Grove on an International Camp with scouts from the Mr. Bakkergroup (both boys and girls which was unheard of in the UK then) from Hatfield’s twin town Zierikzee at Buckmore Park in Kent.  We spent a glorious week learning from each others customs and traditions and taking part in group challenges, trips and activities.  I was camp cook and cooked Spotted Dick which was initially viewed with great suspicion but was eaten hot and cold!  After camp we all came to Hatfield when the Dutch were hosted by the families.

Many of the guides formed lasting friendships and kept in touch as ‘pen-pals’ for many years.