You are here: Home>Topics>People>Memories of Roe Green>Fogotten sounds of Old Roe Green 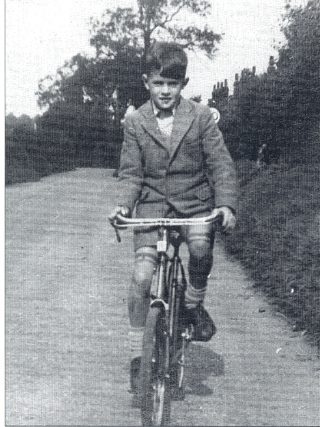 Cycling to school along the once-narrow, hedge-lined old Roe Green Lane before the war. This road is now re-named College Lane 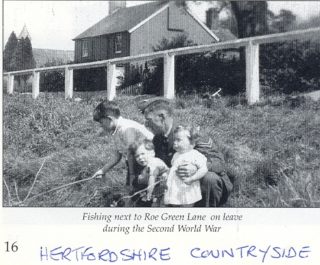 The ear has a good memory.

The first time we walked along Roe Green Lane in 1937 in search of a house to buy my eyes could not find what my ears could hear.
The drone of a single aeroplane a Gypsy Moth biplane, high in the clouds. That sound had been a very rare thrill indeed where I had lived up north, but here we had De Havillands less than half a mile away.

We found the right house, and when my parents came to visit they’d even leave their meal on the table and run outside when they heard the sound of a plane and scan the sky to find it.
The house we bought was right near to Hazelgrove, and from the open window one quiet evening wasn’t it? always quiet in Roe Green in 1937 I heard my very first nightingale. I longed to see it.
“Why not try” we said, “If we hear it again?” The next night we did just that. We crossed the field (now full of Hatfield Polytechnic) and tiptoed through the grove till the trilling sound led us to a coppiced hornbeam. Such an ordinary bird to produce such exquisite song! We could see its open beak and the vibration of its throat. Only a few more evenings like that and then we listened from the window in vain and we haven’t heard a nightingale since.

Houses and College have eaten into our Hazelgrove. But we did still have the owls from there to hoot from high in the beech trees so many of which sadly were cut down when building began.

A rarer and more disturbing sound was the raucous alarm noise from an ambulance in those days. When we heard it from the house it seemed to summon us to run to see what had happened usually on the Comet bridge. The up and down wail of the modern ambulance is, unfortunately, not rare enough to have that effect on us. “We just sigh and say “Someone’s in trouble somewhere”. Hope it isn’t serious”.

Bells were much more common. I think most of Roe Green people rode bicycles and as our lane then had twists and turns and no footpath for walkers, a bicycle bell on the handle bars was a necessity. A new bicycle bell was often a birthday present received with delight.

The Wall’s “Stop me and Buy one” ice cream tricycle had a very tempting call of its own. So did the big bell on top of Roe Green’s “Tin” Chapel on Sundays. And the bell that hung over the door of Lil’s lock-up sweet shop had a delightful ting-a-ling that added to the pleasure of buying sweets over the counter.

The Hatfield to St. Albans train (long since axed) stopped at Nast Hyde Halt and we could hear the clicketty clack on the rails from our garden. When Farmer Hill had a delivery of sheep from Scotland they were brought via Hatfield Station to Nast Hyde to be shepherded by Arthur Bray up Watery Lane and behind our houses to the field. The baa-baabaaing as they bunched past our back gates brought us running up the garden with our children to watch. It pleased us more then than do the slamming doors of students’ cars now, parking nose to tail outside our front garden hedges.

One of the first things we did on moving to Roe Green was to buy a dozen laying hens and a cockerel. So, like many of our neighbours, we had our farmyard noises at the end of our garden, with early morning cock-crow and the intermittent clucking of hens announcing “I’ve laid an egg for your tea.” Right opposite we had Mr Priors horse “Golden Boy” neighing in his stable on the allottments (now gone wild) and Rube Skeggs’ pigs squealing in the pig stys.

Of course our tranquility was soon disturbed by the dreaded sound of warning sirens, which we are pleased to forget, and the constant sound of increasing traffic, the head piercing noise of motor bikes – the portable transistor radios, the pneumatic drills on constant road work which are not exactly harmonious or heart warming.

How can we, now the longest living residents, not sigh deep sighs for the long-past sounds of Old Roe Green?