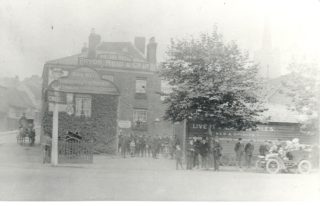 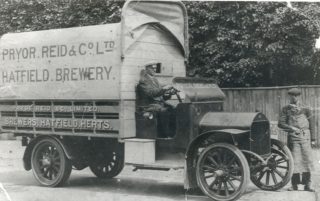 Hatfield is known for an abundance of pubs. It was this, combined with good barley crops, that laid the foundation for the prominence of the brewing industry within Hatfield.

In Medieval England, every inn and large house had its own brewhouse as ale, the traditional English drink, could not travel without going sour. Hopped beer was introduced to Britain in the 14th Century by Flemish or Dutch settlers and the Searancke family were probably Flemish and probably among the first to introduce hopped beer to this part of the world. The history of the Hatfield Brewery is interlinked with the history of the Searancke family as it was the brewery founded by this family that was to become Hatfield’s main industry until 1920.

The growth of an industry

The Searancke family were originally a yeoman family in the early 1500s, living in the Essendon parish. In the 17th Century, they moved over into the Hatfield parish and a branch of this family owned the Chequers Inn, in Fore Street. The Searancke family brewhouse supplied the Chequers Inn, and it was this family brewhouse that grew into the Hatfield Brewery. As other brewhouses began to close, the Searancke one flourished and by the early 1800s, they owned 12 pubs in Hatfield, and more within the surrounding areas.

The development of the Hatfield Brewery made the Searancke family major landowners and employers and by 1780 they owned half the north side of Fore St, the whole of the present Salisbury Square which was the site of the brewery, and more land.

An accident that led to bankrupcy…

In May 1805, the brewery had an accident and a cask containing enough liquid to fill 535 barrels burst, sending a £1,000 river of beer to join the River Lea. Ten years later, Francis Carter Searancke sold his family’s Hatfield holdings which proved to be a shrewd move as his partner, Joseph Biggs, was bankrupt by 1819.

An accident leads to a £1000 river of beer which flowed into the River Lea.

The brewery was bought by Joseph Field and by the time of his death, 1836, it owned 40 pubs and was producing 7,600 barrels annually. In 1836 the brewery was bought by John, Morris and Alfred Pryor, sons of the Baldock brewing family. Alfred later became the sole owner and after his death in 1876 his son Edward bought it for £29,442 and with his brother-in-law Charles Reid, formed Pryor, Reid and Company. They expanded, absorbing neighbouring breweries in Park St, the new Town and further afield.

The end of an era

Hatfield Brewery closed in 1920, causing worries about unemployment in the town as it was such an important provider of jobs. By the time it closed, the brewery owned 98 pubs.

For more information about the Hatfield Brewery click on the link below.