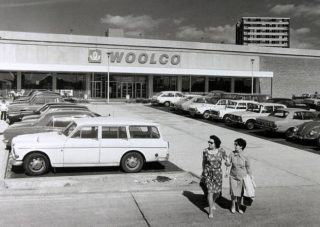 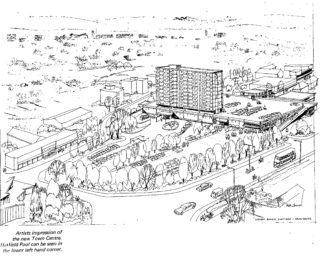 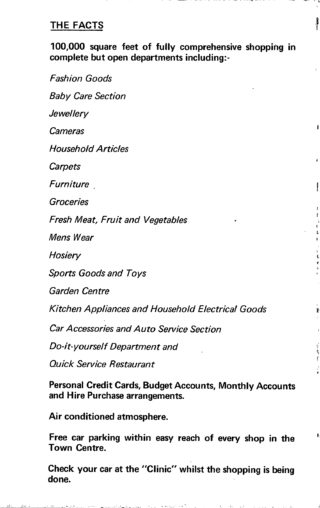 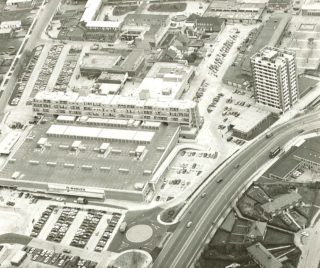 Aerial photo of the store. Queensway House and Hatfield Library are to the right.
Mill Green Museum & Mill

In the late 1960’s and early 1970’s the then Hatfield Rural District Council and the Commission for the New Towns were concerned about the inadequacy of the shopping facilities within Hatfield Town Centre. The solution was to adopt a new system of trading introduced by the Woolco Division of F.W.Woolworth Ltd. The new store was described as “An out of town department store in the Town Centre”.

As well as 100,000 square feet of shopping space there was also to be built-in car parking accommodation, a block of flats built above the store, a Town Centre filling station possibly incorporating a ‘car clinic’ and five additional small shop units.  The store and flats were to be built on the site of Gracemead and Railway Cottages which had been recently emptied and over the carriageway of the former St Albans Road and sealing off the western end of the pedestrian precinct.

This new ‘larger than life’ Woolco Department Store opened in the Town Centre in the autumn of 1972. In 1982 the store celebrated its 10th anniversary by announcing ten days worth of special offers and events to attract shoppers. There were also visits by celebrities such as boxer Henry Cooper, Ruth Maddox from TVs Hi-Di-Hi. Sadly Woolco’s closed in late 1985 the site being taken over by Gateway’s who in turn closed in 1989 when Asda store took over. In the late 1990’s Asda demolished the building and erected the new, modern, purpose built shop, we see today.

Do you remember shopping at Woolco? Share your comments and memories below.