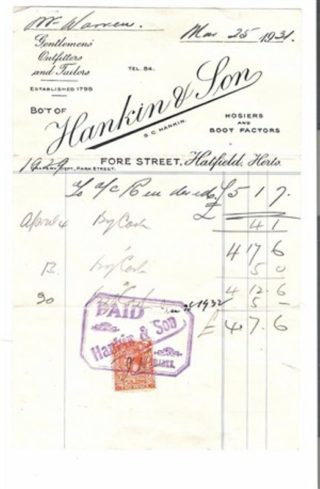 Receipt found by a stamp collector while going through some old papers. 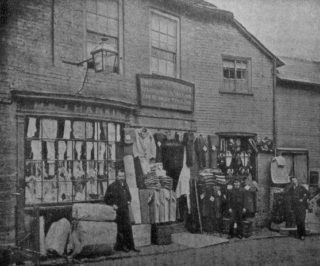 In 1840 William Hankin, whose family were glovers and harness makers in Baldock, set up business at No.38 Fore Street as a tailor.  After his death the business was continued by his widow and son-in-law, William Skillman.  William purchased the freehold in 1855, but business at No. 38 was carried on by his brother-in-law Henry Hudson Hankin who died in 1912.  Meanwhile the latters brother F.F.Hankin was in business at No.44 Fore Street as a linen drapers and clothing business.  This lower shop remained in the Hankin family until 1962 when the shop closed following the death of Stanley Coles Hankin.

While these two businesses carried on in Fore Street, in 1840, other members of the Hankin family, brothers Henry and John Hankin, founded a tailors and drapers business  in Park Street which was continued by Henry’s eldest son Arthur William.  At some point these separate businesses must have combined.

If you have any memories of visiting Hankin’s, please do add them below.