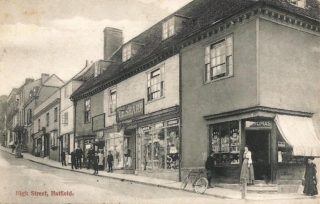 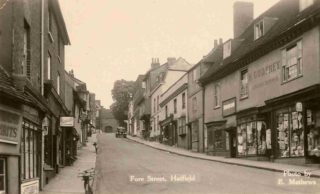 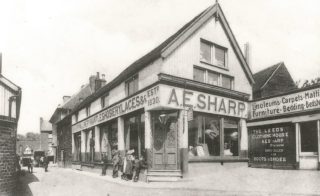 The expanded shop going from Fore St. to Back St. (Church Street)

In 1876 Mr. A.E. Sharp took over a drapers business at no. 23 Fore Street from his Uncle, Mark Powell. Mr sharp was a well known figure in Hatfield and was for many years a churchwarden, “Always attending Divine Worship in top hat and frock coat with a rose in his lapel”

Over the years he expanded the business which now stretched from Fore Street to Back Street (now called Church Street).

“High-Class dress and drapery establishment………the goods which fashion has set its stamp upon are to be obtained here at Sharps just as easily as at the smart shopping centres of the West End of London.”

“The shop of Mr. A. E. Sharp (1852-1912), combined tailoring, outfitting, millinery, haberdashery, children,s clothes and footwear………Victor Chapman (1868-1953) in charge of the men’s and boys’ department fitted our clothes from white blouses, blue striped sailor collar and wide ribbon bow of Sunday best (c1906) to Norfolk Jacket, knickerbockers and stockings of 1911.  In the ladies department girls began careers as shop assistants and left, but Miss Pridell and Miss Dickett and Mrs Eaton, the cashier, were employees of long standing.  The proprietor resided in “The Spinney”, a substantial house with stabling accommodation in Endymion Road, now the site of Malting Mead flats.  His short, portly figure immaculately attired in morning coat, top hat and gold Albert was a familiar figure between house, shop and church.  Later, Herbert Godfrey (1875-1939) took over the haberdashery.  Victor Chapman independently continued the outfitting ……..The Misses Pridell and Dickett started a tiny shop on their own account in a Newtown Cottage.”