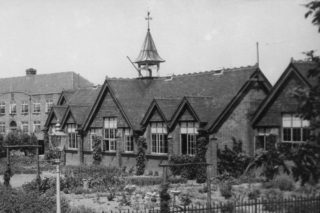 The origins of St Audrey’s School can be found on the London Road School page. London Road School was built in 1850, the year the railway came to Hatfield. It was located on a section of the Great North Road roughly where car showrooms stand today near the junction with French Horn Lane.

By the 1880s, with average attendance of 400, there was great over-crowding. This was eased in 1904 by the erection of a new building at the top of Endymion Road (corner of School Lane). The new school opened in 1905 for the boys only, while the girls and infants remained at London Road. In 1907, the name was changed from London Road Schools to Church of England Schools although, not long after that, the boy’s school was starting to be called St Audrey’s.

In 1913, the infants at London Road moved to the Countess Anne school building in Church Street, leaving just the girls at the old school. On 8th September 1924, the girls followed the boys to Endymion Road where the two departments amalgamated to become a mixed school.

On 12 July 1926, the school at Endymion Road was officially renamed St Audrey’s Mixed School. In the same year, two new classrooms were added, one at each end of the school. It was further extended in 1932 by the addition of science, practical and cookery rooms and a flat.

This reorganisation allowed the school to become a senior and junior mixed school, which it duly did in 1933, although the younger children continued to stay in the Countess Anne School in Church Street until they were old enough to transfer to St Audrey’s. A gymnasium was added to St Audrey’s in 1939.

Disaster struck in 1944 when the school was destroyed by a V1 flying bomb. The bomb exploded around 4.40 a.m. on the morning of Tuesday 10th October, destroying the older portion of the school building along with Police Cottages across the road and a row of dwellings called Primrose Cottages in Endymion Road. Nine residents were killed and many more were injured.

In 1945, St Audrey’s, (still without a permanent home) became a Secondary Modern under the new Act. In 1946, a new building was erected on the old site and, as the Church hadn’t the money, the County Council took it over as a Controlled School.

In 1957, St Audrey’s moved from Endymion Road / School Lane to a new site in Traveller’s Lane. The old site was successively used by Broad Oaks Junior School, Onslow Bilateral and Onslow Secondary Modern, before becoming the home of Countess Anne Primary School when it left its old premises in Church Lane.

In 1985, St Audrey’s moved from Traveller’s Lane to amalgamate with Onslow School in Old Rectory Drive. The amalgamation became Onslow St Audrey’s School and is still there today.

The original London Road School had a bell tower in which a bell hung until 1935 when it was bought by past pupils and presented to St Audrey’s School in Endymion Road. The bell survived the 1944 bomb and was re-hung in the rebuilt school in 1946. It moved with St Audrey’s to Traveller’s Lane in 1957.