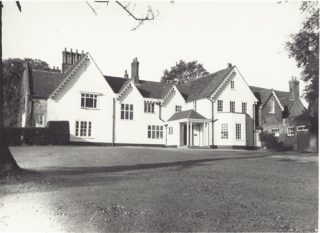 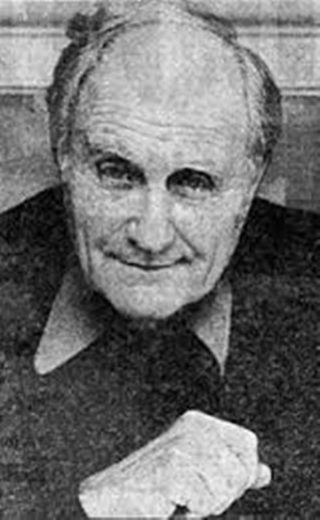 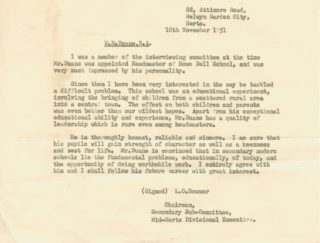 The Old Parsonage or Rectory in Old Rectory Drive was sold to Hertfordshire County Council in 1947 and became Howe Dell Secondary School in 1949, the name being taken from the nearby woods now called Stream Woods.

In 1948 Michael Duane was appointed the Headmaster of the new Howe Dell School. He was offered the post by a Chairman of the governors who had progressive views and John Newsom, Hertfordshire County Education Officer, who gave Duane five years ‘with no questions asked’ to established the school. Until Howe Dell was ready, he was first temporarily appointed head of Beaumont Secondary Modern School in St. Albans for one term.

When Howe Dell opened in 1949, Duane implemented a democratic multi-racial progressive policy which rejected corporal punishment. Duane was faced with difficulties from the start as the chair of the Governors was replaced by the ‘authoritarian’ Alderman George Maynard; the building was inappropriate and lacked facilities; and children had come from schools with varying levels of education. Duane had also been appointed a Justice of the Peace and was nominated as the Labour candidate in the local rural elections. Despite a promising start, the school faced serious accusations regarding lack of discipline and impropriety, which led to conflict

The school received several small visits from the HMI and a full inspection in 1950, which disapproved of Duane’s policies. The school governors demanded Duane reintroduce caning and traditional schooling methods, but he refused. The Governors gave a vote of no confidence in Duane abilities, giving poor inspections and Duane’s election to public offices while employed at the School as the reasons for his dismissal. The case was sent to the Disciplinary Sub-Committee of the Education Committee in 1951. They did not sanction his dismissal, but Duane resigned on the advice of John Newsom.

The school closed in 1954 but was reopened as Howe Dell primary school a year later. In 2007 the Howe Dell Primary School moved from the rectory building to new premises.

Library & Archives of the Institute of Education archive.ioe.ac.uk