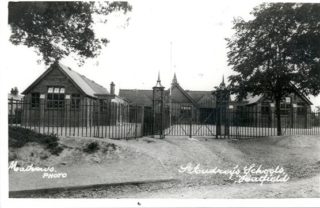 I was born in Stonecross Road in Hatfield, and have memories of when I was about 3 of my uncle taking me for a walk in Hatfield Park and a photo of me standing in front of the tank and on the viaduct there.

The next memories are starting at Countess Anne School in Old Hatfield  in Church Street. As it was a church school, we used to attend services in the church with Lady Salisbury. On August Bank Holiday 1939, some of the children, me included, danced round the maypole on the East side of Hatfield House. I had only just started school, so it was quite an honour to be wearing a long dress and dancing in front of Lady Salisbury. In those days, we did country dancing taught by Miss Butterfield. We used to go for nature walks in Hatfield Park because the school was next to it.

From there I went to St Audrey’s School in School Lane. I had been there one month when the school was bombed. The classes were divided and sent to Dellfield School, Howdell School, the Police station and the Public Hall. My class went to Dellfield school canteen – we had to clean the tables after lunch so that we could have our lessons.

From there, I moved to the Public Hall and then to the new St Audrey’s School which had been completely rebuilt – it is now Countess Anne’s.

When I left St Audrey’s, I was employed as secretary there for a year. From there, I went to be secretary for Hatfield Laundry and from there to Jack Olding’s. I left there to get married and have my family and moved to the other end of Hatfield.

After the children went to school, I went to British Aerospace at Manor Road until I retired 23 years later.