You are here: Home>Topics>Schools & Education>Schools of the Recent Past>Countess Anne Primary School (1913-62)>A Journey to School

A Journey to School 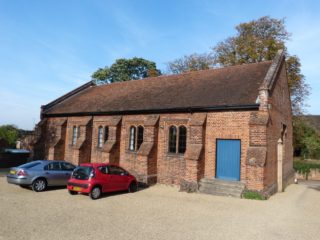 I still remember that slight feeling of anxiety as my mother called “Come along” and lead me on this new venture. My first day on the way to school.

My home was in Cecil Crescent, the house next to Payne’s the printers, and turning left into the St. Albans Road, where in those days the red post box stood right on the corner, I could see the buildings to the right; the Co-op grocer; the Co-op butcher; the bus garage with the tall sliding doors; Kemps off-licence; Tingey’s small shop and Austin’s the hair dressers. All of which were busy concerns in 1936. Onwards then over the railway bridge, where as children we would sit on the fence, note books in hand, to record names and numbers of the fast and majestic brutes and checking how many bogies each train had, etc, etc. turning right into the Great North Road, no traffic lights in those days for it was only a T junction.

The Hertford Road being just after the Red Lion opposite Sheriff’s shop and the horse trough which I believe is now at Mill Green. Sherifff’s had that smell of corn and balancer meal, a musty odour only to be found these days in some old windmills. In bygone days, I don’t know why, but I’m sure the summers were hotter and longer than now, and if we had to take macs or coats, we only used them as cloaks fastened by the top button in wild attempts to imitate Flash Gordon. Along the road, past the dreaded school clinic, and the post office – to the park entrance, which faced the station with the Royal Waiting Room. I think this was only used when royalty visited Hatfield House. A place steeped in history and surrounded with 81 square miles of beautiful woods, scenery and walks etc. and just the place that we could be Robin Hood or any one of his merry men.

Continuing passed the gas offices, Priory House, the Public Hall down Brewery Hill as it was once known, we passed Drury Brothers, (outfitters) Dollimores, (Greengrocer) Melvin Powell, (Photographer) Holliers, (Dairy shop) and others that I’ve forgotten which faced the International Stores and the Westminister bank. I’m sure someone will kindly jog my memory of those I cannot bring to mind. Well, nearly there – on past Daisy Gray’s (Toy shop) and Charlie Tailor (Barbers) and up Church Street to Countess Anne’s School, which I attend for about five or six years.

I see that at sometime the building has been shortened to allow access to the rear, and in doing so one of the front doors is no longer there. In the middle of the play ground stood an oak under which, weather permitting, the whole class would be treated to a lesson in the sunshine, in the hope that there would be no air raid warning.

Were any readers of this letter at Countess Anne’s at this time?