History of the University of Hertfordshire 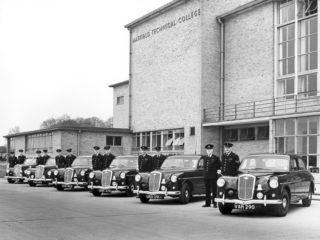 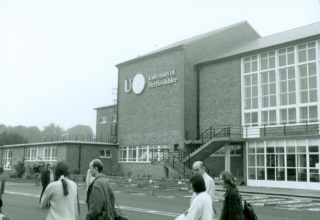 The original campus for the University was at Roe Green in Hatfield. However, it was not a University; it began as a Technical College. From the late 17th century, the land at Roe Green was owned by the Gape family of St Michael’s Manor in St Albans. In the 1920s, they sold the land to Hill, a farmer, who then sold it to Alan Butler. Alan Butler was the chairman of the de Havilland Aircraft Company and lived at Beech Farm nearby. In 1944, Alan Butler donated ninety acres of land at Roe Green on the condition that it was to be used for educational purposes.

In 1946, the Ministry of Education approved the plans for the Technical College and an adjoining secondary technical school, Hatfield School, on the same site. In 1948, the building commenced. The first principal Dr W.A.J Chapman started on the 1st January 1949. In the spring of 1952, the staff were appointed (33 full-time and 66 part-time teachers). In September of the same year, the Hatfield Technical College was opened with 1,738 students. In December the college was officially opened by the Duke of Edinburgh. The college was the first large technical college building to be put up in England after the war. Students attended the college on part-time or full-time courses.

A College of Technology

In 1958, the Technical College was re-designated as Hatfield College of Technology. By 1960, the college was offering four year sandwich Diplomas in Technology. In 1961, the college was named as one of the regional colleges in England and Wales by the Ministry of Education. The Governors purchased a digital computer in 1962, which cost £29,201, and meant a Computer Science degree could be set up. The Council for National Academic Awards was formed in 1965 and Hatfield College was recognised for thirteen Honours Degree courses.

Sir Norman Lindop became the Principal of the College of Technology in 1966. A year later L.E. Haines was made Chair of Governors, but died shortly afterwards and was replaced by F. Bramston Austin. In the same year, Bayfordbury was acquired for the college.

1969 saw Hatfield College of Technology become Hatfield Polytechnic, offering Honour Degrees in Technology. The next year, an observatory was added to the Bayfordbury Campus and W.A. Hill was appointed to the board of Governors.

Wall Hall and Balls Park Teacher Training Colleges merged in 1976 and became Hertfordshire College of Higher Education. In the same year Hatfield Polytechnic took over Balls Park. By 1977, over ten per cent of the students attending the Polytechnic were from more than forty different countries. The number of students in that year was 4,000 in total. The Students’ Union Social Centre was opened in 1977.

In 1980, T.G. Mercer became Chair of Governors and, two years later, Dr John Illston succeeded Sir Norman Lindop as the Director of Hatfield Polytechnic. A new sports hall was built on the Hatfield Campus in 1984 and the number of students at the Polytechnic in that year had grown to more than five thousand. The number of staff, in the same year, had increased to 824 members.

The University of Hertfordshire

In 1994, the Cathedral and Abbey Church of St Albans was chosen to hold the graduation ceremonies of the University. The same year saw the first publication of league tables, and Hertfordshire was named as the top new University. In 1995, The Law School was moved to St Albans. Sir Ian MacLaurin was appointed Chancellor of the University in 1996 and, in 1997, the Learning Resource Centre was opened.