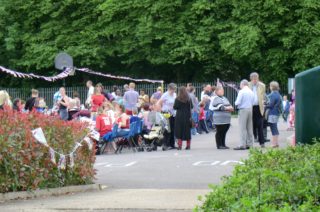 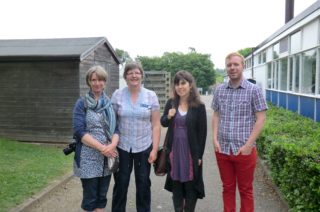 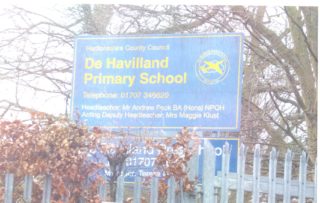 De Havilland Primary School opened in 2005 following the merger of the then Five Oaks School in Travellers Lane with Hazelgrove School on the Five Oaks site.

Celebrations for the Queen’s diamond jubilee began at De Havilland Primary School on Friday June 1st 2012. A long line of tables were set up on the playground for the school’s jubilee lunch. After lunch parents and visitors were welcomed to come and join in the celebrations. It was a wonderful way to start the celebrations of the bank holiday weekend.

At the school’s event the year 5 pupils were participating in an oral history project. This project was the brainchild of Janet Packer, Assistant Head Teacher. Her idea was to create an audio tour that would guide the user from the school to St John’s Church with information about the history of Hatfield for the user to listen to on the walk. In order to achieve this the children were to interview people at the jubilee celebrations about the various categories that had been chosen for the audio tour. These categories included, among others, the school, university, a wildlife stop and the church.

I was lucky enough to be interviewed by two year 5 pupils about the university. Their confidence and professionalism was admirable. I was very impressed with their interview techniques and ability to work the equipment given to them on their own. The idea to have the year 5 pupils conduct the interviews and work on this project was so that they would be able to continue with the project into their final year at the school next year.

Through Heritage Lottery funding the school has been able to have the audio tour done professionally by a company from Cambridge. Victoria Smith, Creative Director of the company, Sarah Baylis, Freelance Oral Historian and audio guide writer and Carl Heartland, audio technician, have been working closely with the school on this project. They trained the teachers how to use the equipment who then trained the year 5 pupils. Colin, a teacher at the school, was with the children on the day while the interviewing took place.

The De Havilland Primary School project was a fantastic idea and a great way to get children interested in local history as well as involving the local church and community at the same time. Well done to all involved in the project, I am looking forward to hearing the outcomes.