You are here: Home>Topics>Places>When Park Meadow was a Paddock

When Park Meadow was a Paddock

By Frank Lodge and Mary Goss 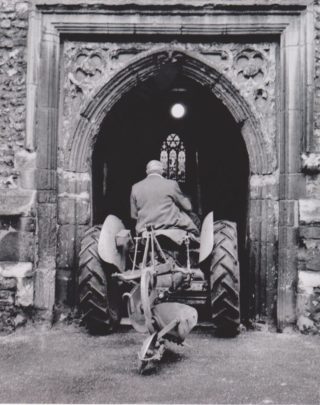 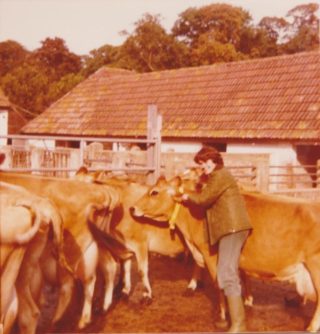 The following article was first published in the March 2015 edition of “Refocused”, the Parish Magazine of St Etheldreda’s Church with St Luke’s.

Frank was in the Royal Navy before he came to Hatfield Park in 1954 (7 years in colours, and 5 years as a reserve) to work as a tractor driver. He told us it was a far different place then, than today, comprising 600 acres of farm land, plus woodland and gardens. There was also land at Marshmoor (North Mymms) and a paddock where Park Meadow houses now stand – was home to a herd of fine Jersey cows . . .

“It was a very mixed farm, arable and dairy, including two milking herds. The late Lord Salisbury held a personal herd of Jersey cows. They all carried his title as he was at the time (Cranbourne Buttercup, Cranbourne Daisy and so on). He spent a lot of time at the farm on his visits to Hatfield, going through all the records and choosing names for all the calves that had been born since he was last here.

“We had a herd of Ayrshire cows which ran on the Queen Elizabeth Oak field and the Lodge House paddocks. We also had a small herd of Aberdeen Angus beef, these were kept at Marshmoor. We used to run these up the Great North Road to North Mymms, so one can see there was not a lot of traffic about in those days. We had a flock of two hundred Clun and Hampshire sheep and a herd of sixty breeding pigs which were kept at Home Farm.

“Behind the walled garden in the farm we kept about six hundred laying hens. The eggs were sold to the Egg Marketing Board— cracked eggs were sold off cheaply to the staff! At this time there were twelve people working on the farm; five tractor drivers, five cowmen, one shepherd and one pigman.

“The tractors we used in the 50s were Ferguson T20, these were great little tractors. The transfer ratio between three point link and implement was superb, it was ten years before its time. We had three furrow semi digger ploughs, which the tractor handled with ease. The only drawback with the tractor, as with all tractors of that time, was that we had no cabs. In late autumn when we ploughed, we sat on the tractors and froze. I can recall us ploughing with overcoats on and railway sacks around our legs. Every half hour or so we would stop and run up and down the headland to get warm, do  another half hour ploughing and repeat our run.

“At harvest festival one of the tractor drivers, Percy Peppit, would drive a tractor, including plough, through the door of St Etheldreda’s Church and up to the altar. We would also bedeck the church with sheaves of oats, barley and wheat. When combine harvesters came into use we supplied the church with bags of different corns. The church used to look lovely with all the farm produce.

“Combining was a very dirty job in those days. Sat all day long in the dust and dirt, we used to go home looking like chimney sweeps. Now with the air conditioned and heated cabs they go home almost as clean as they arrived at work!

“We had our own threshing machine before we had the combines and during the winter time we would thresh the stacks out that we had thatched in the harvest time. Threshing was another dirty job and hard work too. Wheat would be put into 18 stone sacks hoisted shoulder high on a sack barrow which had a ratchet and cog drive, we would then carry these to a trailer.

“Over time, we took back 1900 acres from tenant farmers (mainly due to death of elderly farmers) totalling 2500 acres and increased our tractor drivers to nine. Some years on, when tractors were much bigger, we reduced our drivers back to five. We were then farming 2500 acres with the same workforce that we had in the 50s with four times the acreage!

“The crops that we grew in the 50s were wheat, barley, oats, beans and sugar beet—we grew kale around the dairies, this helped out with the winter fodder. In the 80s and 90s oilseed rape came on the market, this was a very good break crop and profitable too. We grew evening primrose for its oil, mustard was grown under contract for Colemans and durham wheat for pasta. This all did very well, but it was only for a few years as too many farmers got on the bandwagon and the price fell.

“EU rules made farming very difficult in the UK and large parts of the estate farm had to be closed down over time. Only 1000, or so, acres on the Hatfield Park Estate are still farmed today.”

Mary Goss, the bell ringer, told us that she too had worked on the farm, and kindly gave us some of her memories to publish . . .

“I moved to Hatfield in 1977 to take up the position of Farm Secretary on the Hatfield House Estate. The Farm Manager at the time was appropriately named Mr Cattle and helping him was Frank Lodge; the Arable Manager and Adam Wallace; the Dairy Manager. At this time there were three dairy herds, two of Friesian cows and one herd of Jersey cows. Most of my time was spent in the Farm Office, but early in the mornings and some weekends I worked at Home Farm feeding the Jersey calves and young stock. I loved working with the Jersey cows. The only down-side was clearing up after milking. All the slurry produced in the collecting yard by the cows waiting to be milked had to be scraped away and then pressure hosed—which in winter was not my favourite job!

“Another of my jobs outside the office was to make cream once a week for Hatfield House. The consistency of the cream was very important and achieved by turning a screw one way or the other on the electric separator. Lord Salisbury liked his cream very thick.

“The job came with a tied cottage which in my case was School House opposite the Old Palace. At that time banquets took place four times a week in the Old Palace and I certainly had my fill of hearing ‘Green Sleeves’ and ‘Hey-Nonny-No’. Very often I had people, mostly schoolchildren, peering through my kitchen window, and would hear a surprised exclamation as they spotted tomato sauce or some other ‘modern’ thing on the shelf!

“I started bell ringing at St Etheldreda’s after meeting Bob Cochrane who worked on the estate. He took me along one Thursday evening and shortly after I met my husband Rob there and we have been ringing at Hatfield ever since.”

Thanks are expressed to Frank Lodge and Mary Goss for permitting the above article to be reproduced – and to the editors of “Refocused” (http://www.stetheldreda.org/) for providing the text and images.