You are here: Home>Topics>Places>The Old Parsonage 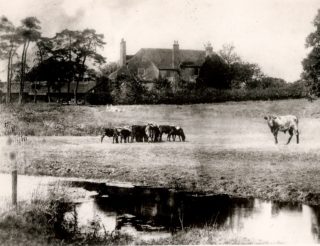 An old photo found at the Parsonage

This former old parsonage, later a school and now a adult care home for adults with mental health conditions, has its origins probably in C15 although it is thought that there was a predecessor to the present building on the same site.  The building has been altered over the centuries and has been a residence for many Rectors of Hatfield as well as some relatives of the Cecil family.

In 1888 Lord William Cecil became Rector.  Lord William lived in St Audrey’s at the top of Church St. Old Hatfield, which was built for him by his Father the 3rd Marquess of Salisbury.   In 1911 the Old Parsonage or Old Rectory, as the building became known, was sold as a private residence, then in 1947 was bought by the County Council becoming Howe Dell secondary school 1949-54, then Howe Dell primary school in 1955.  In September 2007 Howe Dell Primary School relocated to new buildings in the centre of a new housing estate built on the old BAE airfield. The Old Parsonage/Rectory is now owned by Nouvita/Psycare and is called Howe Dell Manor.  Some of the grounds were also sold off for a small gated housing development.

More information about the Old Parsonage can be found in:-

Howe Dell The story of a House. Compiled by the Millicheap & Willis families, 2004