You are here: Home>Topics>People>Memories of Bryan McCoy 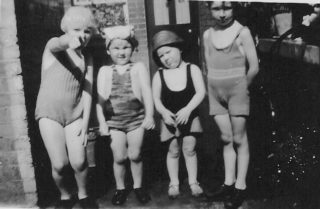 I have lived in Hatfield since I was 6 months old. I was in the Gun Cottage behind The Gun pub, where the Co-op furniture shop is now. The publican was Bob Cannon. The cottage was damp; we lived there till 1947. We were the first people to move into the pre-fabs in Farm Way; it was a Howard pre-fab which was a double decker.  There were only 24 double deckers. We had a very cold snowy winter in 1947 and it was very cold. We only had one fire in the house and we had to burn it all day to try to get warm. Crawford field was at the back of the house. After the harvest of the potatoes, we would go over to the field and collect the ones that had been left behind.

They started to build more pre-fabs in the 50s for the workers at de Havilland. Some of the contractors for earth moving were Marriots, who used to be in Wellfield Road.   I started work at Welwyn Builders in 1954 and stayed from September to March – just 6 months. After that I went to Lemsford Engineering, which was part of the old the Mill then. I did sheet metal work and then went on to be a welder. I left after 24 years and 3 months, when my old manager left.   I retired after 25 years at John Radcliff’s at Welwyn Garden City, where I was a welder.

The worst change to Hatfield closing the St Albans Road and building Woolco – the town has never been the same since. Tescos moved out, and all the best shops moved out as well, including Shoppers Paradise. That was also the end of Old Hatfield because the shops there closed down as the ‘new town’ became the main shopping area. Loads of house were pulled down to make way for Woolco’s.

There were no pre-fabs in Drovers Way because it was only built after the pre-fabs were knocked down and the road was re-named because Farm Way had a bad name.

We’ve lived in various places on the Birchwood Estate. There have been changes there – Lockley Crescent was built. The estate was new and a good area to live – they pulled down Crawfords farm to build it. There were 2 farms around Hatfield in the early days. Sherriffs Farm was a little way outside and there was another one near to where Asda is now.