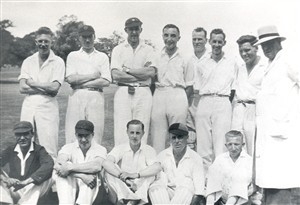 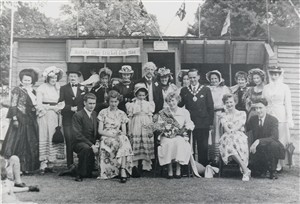 The inaugural meeting of the club took place on Saturday May 13th 1889 in the Village Schoolroom. The club enrolled thirty members, and was named Hatfield Hyde Cricket and Quoits Club. Subscriptions were fixed at 2/6d per annum for Cricket, 1/6d per annum for quoits, with a joint membership of 3/-.

Lord Salisbury generously donated a portion of land in a field, opposite the houses known as ‘The Row’, for a nominal rent, and Mr Kendell offered to start the club with a set of cricket clubs and quoits.

In 1936 and 1938 Basil Hulks made a little bit of history for the club by taking 101 wickets at a cost of only 4.80 runs each. Mr Hulks can be seen in the top photograph in the back row, third from the right.

In 1948 (not quite the 60th anniversary, a mistake that was only realised later) it was decided that the diamond anniversary of the clubs formation should be celebrated with a programme of events. A cricket week was held during the first week of August, the end of which was celebrated with a grand Dinner and Dance. The photograph above was taken during the celebrations, all the members in the back row are dressed in 1880’s clothing with parasols, hats and whiskers!