You are here: Home>Topics>Organisations>50th Anniversary of Hatfield Library 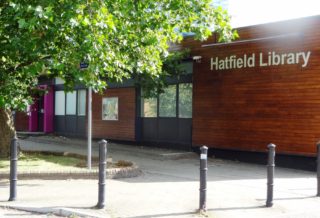 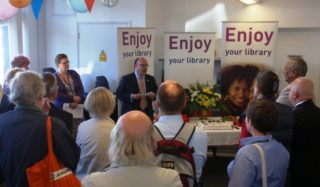 The library moved from a wooden building alongside the Council offices in St Albans Road. This building was described in the Welwyn Times & Hatfield Herald as “The tiny wooden shack” in contrast to the new library which was described as a building having “Space and Light, a classical dark grey and white outside, the interior is in pale blue and pastel green”.

The library and Queensway House was opened on Wednesday 19th September 1962, by Sir Keith Joseph Minster for Housing and Local Government.  The estimated cost of the building, including furniture was £25,100.00

One of the first borrowers to use the library was Mrs. E.S.Stanyon who had been a library member for over 30 years. According to the newspaper report at the time she had come in “For three books; a mystery for herself, an educational book for her husband and a romantic book for her mother”.

The event was well attended, Councillor Chris Hayward Chairman of the Hertfordshire Local and Libraries Cabinet Panel, gave a speech and cut the cake. He said that the library today is a busy centre for the community of Hatfield; there are 24,671 items in stock to chose from including books, music, recordings, DVD’s, and talking books. Last year the number of items borrowed totalled 127,600.