You are here: Home>Topics>Housing>Hatfield's night of terror

Houses in two rows at Hatfield had their roofs blown off by the gale. The row between with the roofs sloping in the opposite direction, was undamaged
The Times newspaper, Tuesday November 5 1957 page 18 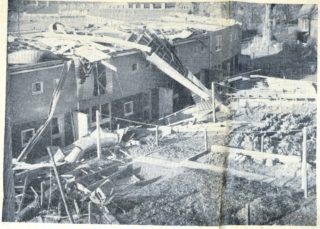 Looking down from a verandah on flats in Robins Way. A bomb could not have done more damage
Herts Advertiser, 8 November 1957 page 3 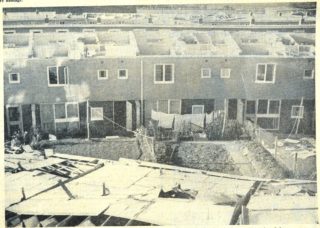 Terrified residents lay in their beds as the gales tore through the roofs, which were flung into the gardens below
Herts Advertiser, 8 Novemeber 1957 page 3 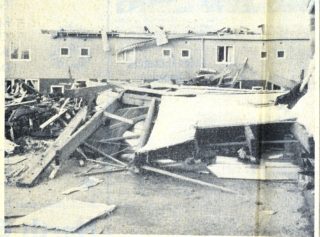 This picture reveals the incredible damage after the storm
Herts Advertiser, 8 November 1957 page 3 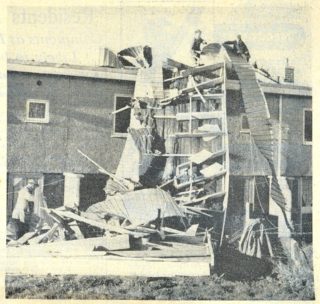 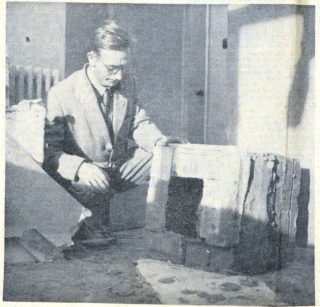 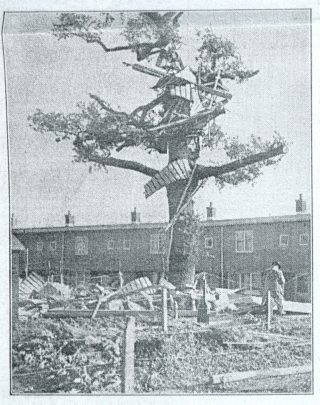 Debris in the branches of a tree in Hatfield
The Times, 5 November 1957 page 18 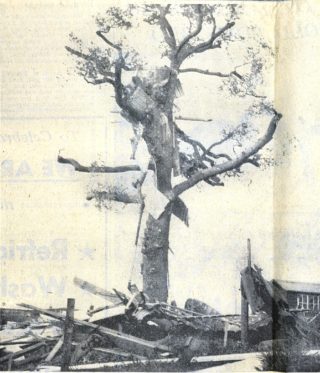 Roofing ripped from houses, flew through the air and landed in the branches of a tree
Herts Advertiser 8 November 1957 page 3

In the early hours of Monday 4 November 1957 Hatfield was subjected to a night of terror.

The roofs of houses were sliced off as if they were pieces of cheese and sailed through the air in gale force winds of 80mph.

The airborne roofs of houses were hitting blocks of flats in Robins Way, causing the plate glass windows to explode on impact.

Some of the houses seemed to be reduced to strips of twisted board and metal. A roof was even wrapped around a tree.

One house had water cascading through the ceiling. The roof was off; water flooded the upstairs rooms and in the sitting room soft furnishings were bedraggled and ruined.

People were told to turn off the electricity from the mains, which left them groping about in the dark, until the street lights could be turned on again for the emergancy.

As you can see from the photos devastation reigned in Hatfield. About 50 houses were affected and 26 roofs were completely off.

Operation storm path went into operation and by night fall 24 homeless families had moved into empty corporation houses in Hatfield and Welwyn Garden City. Mrs Swallow of the County Civil Defence Welfare Office, was placed in charge of emergancy feeding. Preparations were made to sleep 150 in Cavendish Hall that night, but offers of private hospitality flooded in; no beds were needed.

At daybreak it looked as though an H-bomb had hit the terraces of houses built like the tiers of a wedding cake on the slope of a hill overlooking the Barnet-by-pass.

After a night in strange surroundings, some of the displaced families returned to their ravaged homes. In Robins Way, a woman tucked a doormat under her arm. Another bent down among the wreckage in her back garden to gather flowers peeping from a chimney pot. A three year old evacuated with her parents, returned red eyed after a sleepless night to find her lost Teddy Bear. He was salvaged from the devastation minus one ear, but a joyful reunion had.

Upper rooms of houses gaped to the sky, spirals of metal sprang from broken houses, amazingly ten complete rooftops lay in a row across a lawn.

The some of the streets affected by the gale force winds were:

Through out the Hatfield New Town area there was a feeling of relief that the major damage was to the houses and not to the persons living there.

Mr Lional Brett, a partner of Brett, Boyd and Bosanquet, the architects for the houses, said “that the damage might have been caused by suction from above or pressure from below. The damaged occured to the most exposed roofs of houses in the most exposed part of town, and an inquiry would be held.”