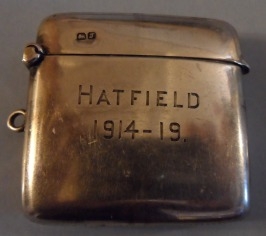 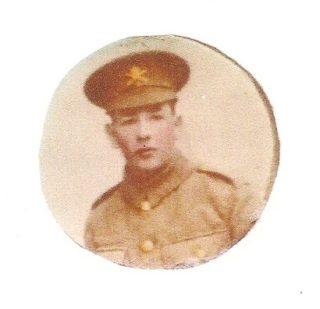 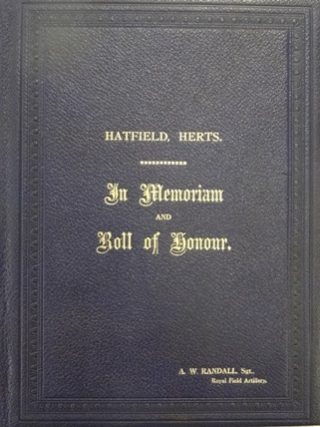 "In Memoriam and Roll of Honour Album"
Derek Martindale

While researching for the Hatfield Local History Society’s WW1 project, to commemorate the Centenary of the start of the War in 2014, we wanted to know how the “In Memoriam and Roll of Honour Album” came to be produced.

The book must have taken up a large amount of time to collect and collate the 867 names contained within it, and what were the criteria for a soldier to be included? We asked members of the Society, searched the Mill Green Museum’s archives, spoke to families whose relatives were in the book, not surprisingly drew a blank, as the event occurred nearly a century ago. As in most cases when carrying out this type of research we had a piece of luck.  While I was looking through Hertfordshire Archives and Local Studies, on line archive catalogue, I came across a reference to papers of a Mr A. Whitby who was Secretary to the Hatfield Parish Council, and was joint Secretary to the Souvenir Committee at the end of the war, these papers turned out to be a gold mine of information into the soldiers in the book. The papers showed that in 1919 in a directive from the Government, (due to ground swell of public opinion), Peace Celebrations should be organized by Local Authorities across the land. From the papers, a public meeting was held at the Public Hall on Thursday 3rd July 1919. From this general meeting a Peace Celebration Committee was set up (more about the Peace Celebrations in our book), another decision taken at this meeting, was to offer a Souvenir to all the relatives of soldiers who were killed, as well as to the soldiers that survived the war. From the ranks of the Peace Committee a Souvenir committee was set up; it was this committee that made the decision to give a souvenir to every man who left Hatfield to enlist in the armed services, (the Criteria).  At their first meeting it was decided to offer a choice of one of two souvenirs, an “In Memoriam and Roll Of Honour Album”, or a Silver Match Box engraved Hatfield 1914-19.

The silver match box came as quite a surprise as we always believed that there was only one souvenir on offer. A total of 744 books and 121 Match Boxes were purchased. Whilst there are many copies of the Album in circulation we did not come across the matchbox until we had a stroke of luck.  Whilst talking to one of our neighbours about our project she said that her family had one.  This was given to Mr George Leonard Pollard of Wildhill, brother of Thomas David Pollard who was killed in action at Loos on the 25th September 1915. Photos are of George Leonard Pollard and the matchbox. (Courtesy of Mrs Mavis Stoker)