You are here: Home>Topics>Hatfield At War>The First World War>Gunner David Page and the HMS Aboukir 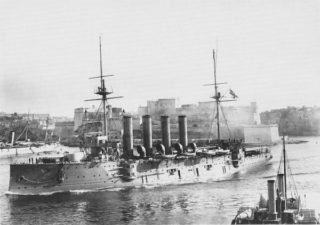 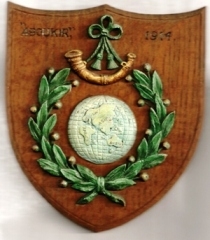 While browsing the 1914 Hatfield Parish Magazine’s looking for information for the Hatfield History Society’s WW1 project, we came across the first Roll of Honour to be published by the magazine in October 1914, it listed “David Page gunner of White Gate, Hatfield, who served aboard the Aboukir and was not on the list of survivors”. By coincidence, my wife Chris, happened to mention that her mother had a plaque which commemorated the Aboukir. Chris’s Great Uncle was a Royal Marine who served on the HMS Aboukir before WW1, he died in 1910 and was buried in Malta.

The HMS Aboukir was a Cressy-class armoured cruiser. She was built in Scotland in 1902, and by the start of the war, (due to greatly improved ship design), this class of ship was almost obsolete. The Aboukir along with her two sister ships the Cressy and Hogue,were put into action patrolling an area off the North Sea. The ships were slow and not zigzagging (a defence against torpedoes), on the 23rd of September 1914 at 6.25am they were spotted and attacked by the German U-boat, U9; HMS Aboukir was hit by a torpedo (which caused her to list and sink in about 0.5 hour). The captain thought that they had hit a mine, and called for the other two ships to help save the men in the water, the result was that both the Cressy and the Hogue were also sunk with a total loss of 1459 lives, of which David Page was one. He was one of the first of many Hatfield men to have been listed as Killed in Action.

To read the full the story of HMS Aboukir go to http://www.worldwar1.co.uk/