You are here: Home>Topics>Hatfield At War>The First World War>A Letter from the Front 25th July 1916. The Somme

July 2016 the Centenary of the battle of the Somme. 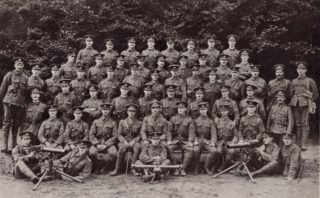 Extract of a letter published in the Bishops Hatfield Parish Magazine August 1916.

“. . . . . . At last I am able to write you a letter, I expect you wonder what has become of me all this time.  Well, I am glad to say I am still alright, although we have had rather a rough time lately.  We have been in a hot corner and suffered very heavy too. . . .  We were just where the fighting was hottest.  First of all we were in support, for two or three attacks, and they gave us something for it, and we lost scores of men.  We finished up our job by attacking the Huns ourselves, and we gave them all they wanted although it was a hard job that we had to do.  We had a big piece of ground to advance over with German Machine guns and rifles firing all the time but with taking advantage of every bit of cover we could get, we got to the German line and drove them out of it, but after that they held us up a bit; we had another go at them at night to try to take a village.  We got to the edge of it and then their fire was a bit too warm for us but we hung on until we were relived.  It was rather a stiff job going over twice in one day, but still we managed it.  Our casualties were heavy as throughout the time we were in we lost over 400 men.  Did you hear that George and Ted Hemmings were both wounded, also Jack Warner.  Percy Canham has gone into hospital with some complaint or other, I believe.  I was glad to hear you were all better at home again and that Dad had started work.  There will be no need to worry about me for a time as we are out of the trenches for a rest, and are some distance from the firing line, in fact we can only just hear the guns. . . . .  I received parcel quite safe the other day many thanks for same, it came very acceptable as we were very short at the time and had had no bread for 3 days.  Did I tell you I am in charge of two guns and twelve men now?  Had rather bad luck in one attack lost eight out of twelve, so you can guess it was pretty warm.  Sorry to say a pall of mine was killed after winning the Military Medal; I miss him very much as he was a nice chap.”

From The Archives of the 6th Bedfordshire Regiment for July 1916

15 Jul 1916 [The Battle of the Somme – the Battle of Bazentin] Attack on POZIERES by 112th Bde. from trenches S. of CONTALMAISON, Bde. held up by hostile machine guns, established itself about 100 yds from the lisiere [comment; either 100 yards north of the edge of Contalmaison Wood, or 100 yards south of the Pozieres village boundary] & dug in. Casualties (3 Offs. Killed, 32 O.R. Killed) (25 missing) (9 Offrs. Wounded, 174 O.R. Wounded).

William survived the war and finished his army career with the rank of 2nd Lieutenant. He returned to his family home at West Lodge, London Road Hatfield.