You are here: Home>Topics>Events>Coronation celebrations 1953 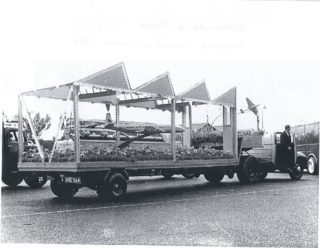 The Hatfield Rural District  Council produced a souvenir programme of the celebrations of the Coronation of Her Majesty Queen Elizabeth II on Tuesday 2nd June 1953. Lord Salisbury wrote a short foreword.

‘When knights were bold’ by Hatfield Dramatic Society, held at Hatfield Technical College at 7.45pm. A limited number of tickets could be reserved for a charge of 5/- each or unreserved tickets on the night were 2/- and 1/- for children.

There was a combined church service at 3pm at the Hatfield Parish Church.

There was a carnival procession which began at the De Havilland car park at 3.15pm and it’s route took them past Stone House Hotel, St Albans Road, French Horn Lane, Great North Road, Briars Lane and finished at Howe Dell School sports field where there was a short drumhead service.

Dancing following from approximately 8.30pm with the evening ending with a bonfire and fireworks display.

Entertainment and supper for residents of 65 years and over was held at the Hatfield Technical College with entertainment being provided by pupils form Mrs Stainforths school of dancing.

The De Havilland choral society presented a concert version of ‘Merrie England’ and Gasgoyne Cecil school with tickets being priced at 2/- and 1/-.

During the evening a coronation civic ball was held at Homestead Court Hotel, details of the event could be obtained from the council offices.

The week of celebrations ended with an open day at De Havillands.

The Hatfield Rural District Council also presented a coronation souvenir mug to all the children in the Rural District born between 1st June 1938 and 3rd June 1953.