You are here: Home>Topics>Events>1953 Coronation Procession 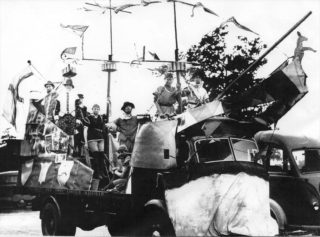 This Photo is of the Hatfield Senior Scouts Float in the 1953 Coronation Procession. It was built by us scouts in one of the old stable buildings of Birchwood Farm which the scouts had then recently taken over to form a new headquarters.  I was sent this a few years ago by Gerald Moore, the Elizabethan  on the far left of the picture. The only other two I can name; are on the right of Gerald, who I believe to be Edward (Ted) Bracey and the one holding the middle mast is me, Mike (Buster) Browne. I recognise the other faces and remember activities with them but as to their names; they elude me. Can anyone help?

We had to make the two taller masts of our “Golden Hind” so the top sections could be lowered to get under the telephone and electric cables that crossed the roads. I remember it was a damp day but the painted cardboard coverings survived the carnival route and it was a very successful day..

Sheriffs the Agricultural Suppliers from the Great North Road kindly loaned the lorry from the day before, for us to erect the structure on the vehicle.